The park is gifted with one family of gorillas which used to roaming around the forest in three countries but finally decided to settle in Uganda at Nyakagezi. 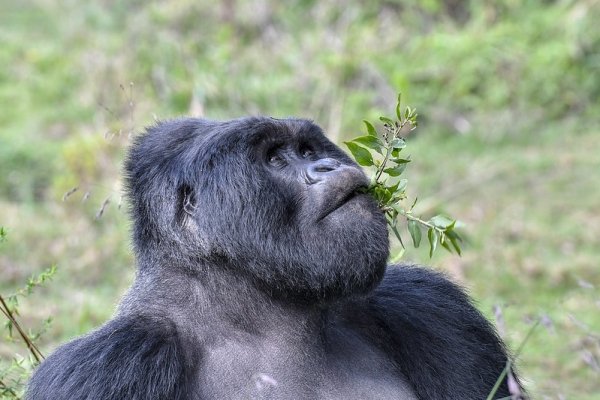 The group is habituated and if you are interested in doing gorilla tracking, you are advised to do prior booking and have a permit secured which costs US$700, US$600 and UGX250,000 for foreign nonresidents, foreign residents and East African citizens respectively. Activity charges here are the same as those of Bwindi impenetrable national park. Tracking commences at Ntebeko entrance main gate at 8:00 daily through the forest until they are found. It may last for 2-4 hours depending on where they are spotted because they are always expected to move in search of food. Visitors are accompanied with a ranger guide to easily take them through the forest and are advised to usefully utilize their time because they are given only one hour to spend with these giants of the forest.

Mgahinga harbors 180 species of birds not forgetting the endemic striking Albertine rift valley species. Bird watching permits cost US$30 for foreign residents, US$30 for foreign residents and UGX10,000 for East African citizens. This allows the visitors to have an expert birder to lead to some of the well known areas for birding such as the gorge trail between Gahinga and Sabinyo which has some of the most beautiful bird species like the cape robin-chat, Kivu-ground thrush, dusky turtle dove, brown crowned tchagra, blue-headed sun bird among others. Additional perfect areas for birding are the bamboo forest which is about 25,00m above sea level and the montane forest which is about 2,660m above sea level and this is where the Rwenzori Turaco is highly expected to be sighted.  The chubb’s cisticola, red-faced woodland warbler, banded prinia and dohert’s bush-shrike  produce sweet vocals at the Uanda-Congo border though they are not easily seen.

The strategic location of Mgahinga national park calls for need to hike on any or all the three volcanoes in a day at a fee of US$80 for non foreign, US$70 for foreign residents and UGX50,000 for East African citizens. These volcanoes include;

Mt. Sabinyo.  It derived its name from the word Iryinyo which locally means “a tooth”. The top of the volcano has rugged surfaces like an old man’s teeth hence its name Sabinyo.  The extinct volcano lies across the border of Uganda, Rwanda and the DRC. The activity starts at the tourist centre of the park with a ranger guide and walking sticks. It takes eight hours to climb and move down to the bottom and visitors to come across different landscapes: grassland where you may spot the endemic beautiful Rwenzori Turaco, bamboo forest the habitat for golden monkeys and rain forest etc. It also harbors other mammals like elephants, buffalos among others though they are rarely seen. Once you are at the pinnacle of Mt. Sabinyo, you are able to view Uganda, Rwanda and Congo at the same point.

Mt. Gahinga. This one is said to be the smallest of the three and lies at the border of Uganda and Rwanda. From the language spoken in the southwestern Uganda- rufumbira/Kinyarwanda, gahinga means “a pile of stones” and the volcano was named so because its appearance was related to a pile of stones. It is also dormant and lies 3,474m above sea level with a 180m wide swampy caldera that was preciously a crater lake. The hike is a 6 hour trip and it gives a great view of the green farmlands around the fertile place.

Mt. Muhavura. Visitors are driven from the park headquarters at Kinigi at 7:00 to the point where moving on foot starts. It is the 3rd tallest mountain in Uganda lying at 4,127m ASL. It takes about eight hours to cover 12km trip and hikers are required to carry water, food, a tent and sleeping gear. Its peak is a good viewing point for various areas including the Virunga volcanoes, Lake Edward in Queen Elizabeth national park, Bwindi and Mt. Rwenzori.

Mgahinga national park is the only place in Uganda where one can do this activity. The Virunga conservation area has an estimate of 3,000-4,000 golden monkeys, out of which 40-65 0f them are habituated in Uganda’s Mgahinga national park. Tracking these endangered beautiful primates may involve moving longer distances since they tend to move a lot around their habitat and therefore you should be physically fit for this activity.

Cultural experience of the Batwa trail

Anyone with interest of experiencing an ancient life of the world’s ancestors needs to participate in this activity to know how the indigenous Batwa lived in the forest as hunters, gatherers and keepers without damage. The visitors are entertained by these pygmies with their cultural dances, weaving skills, and other life style. A foreign nonresident and foreign resident pays US$80 and an East African citizen UGX50,000 to do the cultural experience.

Top Things to Do in Mgahinga Gorilla National Park in Uganda

Getting a gorilla permit in Congo