The Ankole Long-Horned Cattle In Uganda

Wildlife and adventure safaris in Uganda that expose tourists to prominent attractions like lions, mountain gorillas, chimps and breathtaking landscapes including waterfalls are priority for the majority. Uganda is however endowed with much more than wild, the domesticated long horned cattle in the western parts of the country. The Ankole long horned cattle are called so because of their long horns that can be long up to 8ft. it is said that the long horns are mainly for defense purpose in case enemies attacks the cows- for example predators such as lions, hyenas and leopards. Also referred to as “the cattle of Kings”, this breed of cattle is also found in Rwanda and Burundi. In Uganda, they are reared by Bahima and Banyankole. You can visit some of the nearest areas when on your trip to the western region such as wildlife safaris to Queen Elizabeth national park, Lake Mburo national park, Bwindi national park and Lake Bunyonyi. Specific districts where the Ankole long-horned cattle are reared are Mbarara, Kiruhura, Isingiro, Ntunagamo and Bushenyi. You will find the cattle keepers with their animals in the pasture plains always holding strong sticks known as “enkoni”. Every cattle keeper has “enkoni”. 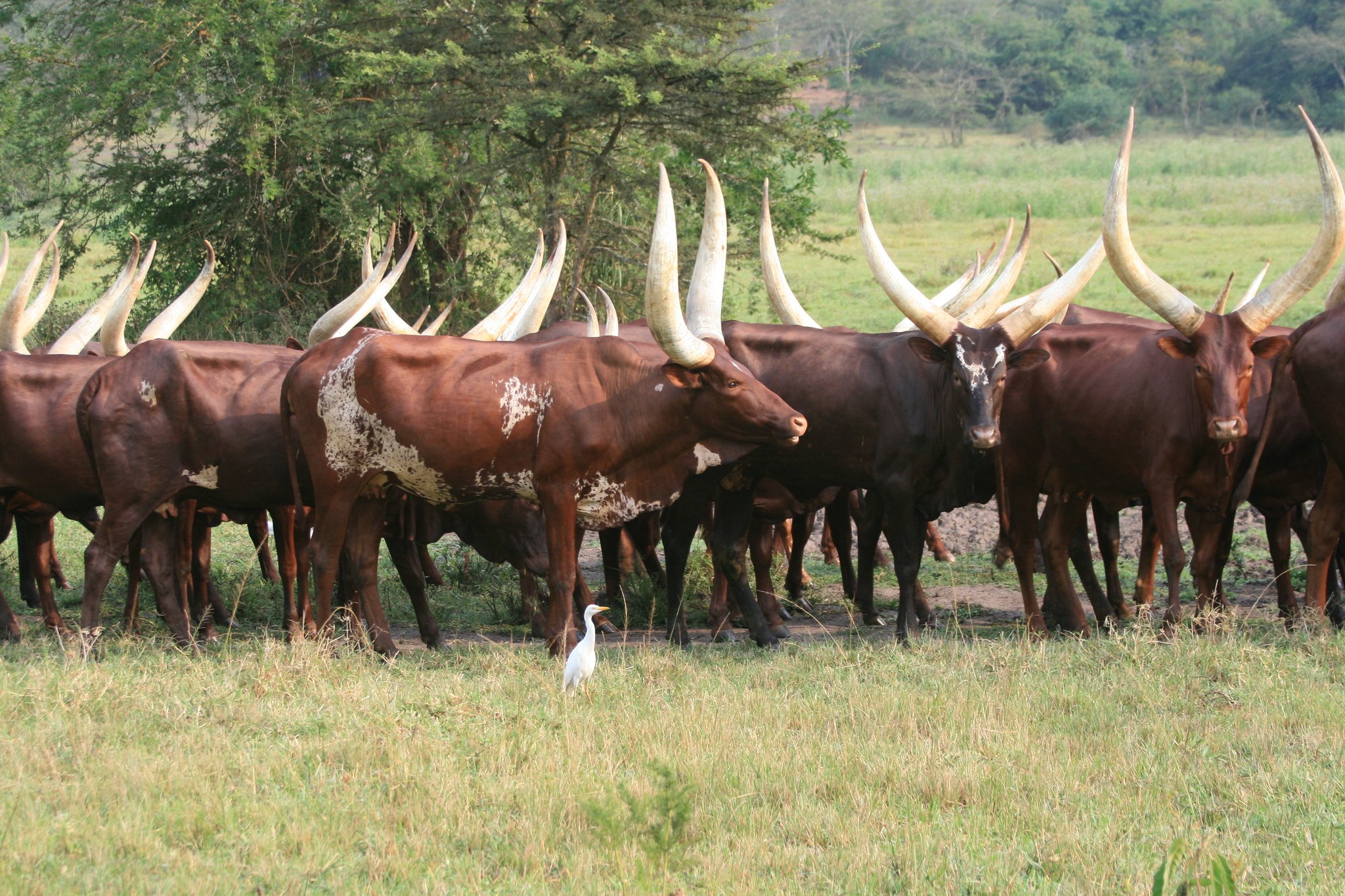 The Ankole long horned cattle in Uganda are a type of the Sanga cattle breed. Among the different types of Sanga cattle breeds, the Bahima in Uganda decided to rear the Ankole long horned cattle which are also known as Watusi cattle, a word that is named after the Tutsi tribe in Rwanda. Traditionally, these cows in Uganda were and are still considered as a symbol of wealth and status. They are respected and are not used for meat in the western region but people from other regions do have them for meat. Among the Bahima, Ankole long horned cows were and are rather used for paying bride price and dairy products like butter, ghee and bongo.

It is believed that the Ankole long horned cattle were reared by herds men that were originating from Egypt. They had Zebu cattle which originate from India and cross breed resulted into Sanga cattle. Apart from Uganda, Rwanda and Burundi, Sanga cattle are still being reared in Ghana and Zambezi. Besides the long horns, these cattle are unique from other breeds for their loose sheath and a shorter neck.

Ankole long horned cattle were/are respected and the original keepers of this breed of cattle do not use if for meat. Slaughtering a healthy cow for meat was considered as cannibalism. They were used for measuring wealth and status, paying bride price and for dairy products. When the keepers had wrangles or misunderstandings between each other, they would compare themselves with the size of the herd of cattle they have. Slaughtering cows was done on special occasions and all the parts of the cow were of importance; hides were used as clothes, mats and for making drums and stools. The dung of these cows was a great building material for plastering houses.

Ankole cows were termed as “the cattle of Kings” because of the strong ties and importance to the royalty of the people in the region. These stunning animals attended special ceremonies of Kings, were decorated and smartened up and involved in the dancing by listening to music. Uganda cows with long horns.

This is the breed that is reared in Uganda. They are treated with respect by the keepers. They are mainly for wealth and status purposes, for paying dowry and for dairy products. In comparison to other strain cattle, Bahema has relatively smaller horns. Today, it is also reared for meat. This breed of the Ankole cattle is also found in north Kivu.

This breed is found in the southern part of Kivu close to Lake Kivu.

Tutsi strain is a major breed in Burundi. It is reared around the areas close to Lake Tanganyika. They are characterized by very long horns and red color.

This breed is found in Kigezi region. It is rare and relatively alike with Bahema strain.

How to treat Ankole cattle to ensure they are healthy

Ankole long horned cattle can survive with little food and water. They have a good digestive system that perfectly regulates moisture in the body of the cow. They feed on grass in the pasture lands and keepers add them a little supplement. They need sheds where dodge heavy rains from. These sheds need to be spacious enough to accommodate them since their long horns require them not to be congested.

Ankole Watusi cows are sold generally like any other domestic animals. The difference in selling these cows from other cattle breeds is that their prices are higher because they are lager in size. Most people sell their cows from the ranches. They are mostly sold to abattoirs for business and also to individuals for rearing or for meat on functions. If you need to buy the cow, you find out about those who rear and can sell, find out the price and you could negotiate.

Horns of the Ankole cattle

Horns of Ankole cattle are too long and wide that they always need enough space from one another. They have to be tied in one position during transportation. When an Ankole cow has been slaughtered, out of the many important items that remain from the cow, the horns are very beautiful items for decoration.

Ankole cows in Uganda are useful in the following ways

Up to date, Ankole cows are used for wealth and status in the western region.

They provide good quality fatty milk which for drinking and making other dairy products especially ghee and butter. In manufacturing industries, milk is processed into yoghurt and chhese.

Ankole long horned cattle are used for paying dowry among the Bahima and Banyankole.

Besides milk, they also collect blood from the veins of the cows or when they slaughter which is cooked to make a great local meal.

Pastoralists earn from these cows when they sell some of them

Ankole long horned cattle are used for reinforcing social relationships among the cattle keepers. It happens when grazers meet in the field and exchange stories, also the cattle ranchers meet to share issues concerning their cattle.

Wastes especially dung is used for plastering local houses in villages and also a great fertilizer for farm plants.

These long horned cattle are considered to be the best gift you can present to someone.

Some people use urine of cows as medicine

You realize that the Ankole Cows are some of the most wonderful breeds of cattle to keep on a ranch. You may choose to rear them as original breeds or cross breed them for better output of other breeds. Products from Ankole long horned cattle are of a classic quality, from milk, meat, hides and skin and more. You can find out more interesting facts about these cattle when you visit one of the ranches on your safari to one of the parks in western Uganda.