Gorillas is distinguished into two groups, the Eastern Gorillas and the Western Gorillas. Each Gorilla group is subdivided into two, the western Gorillas are subdivided into the western lowlands and the river gorillas and the eastern gorillas are subdivided into the mountain gorillas which inhabit the higher altitude areas and the eastern lowland gorillas inhabit the lowland areas. Gorillas lifestyle is that they live in the groups of 5 to 10 members and more and each family is by the dominant silverback as the leader of the family, he decides for the whole family for example the feeding areas, nesting areas, he also provides protection to the family members, he defends them from any cause of harm form other gorilla families. Just like humans, the male gorilla is also the head of the family and he will defend his family at any cause.

There are several reasons as to why the gorilla in Africa is considered as an endangered species, we look at the top reasons closely affecting the life of the gorillas.

Habitat loss, gorillas in Africa, live in the dense tropical rain forest in Africa, the forest offers cool, moist climate and the different vegetation types from which the gorillas feed on. The gorillas are herbivores and mainly feed on stems, bamboo shoots, ants, leaves, plants and others for their survival. The biggest challenge facing the gorillas is habitat loss whereby the forests have been destroyed due to the following reasons; the increased number of people in the country in different communities which has led to encroachment of people in to the forests in search for land for settlement, agricultural purposes, livestock raring. Deforestation where by the trees are cut down for fire wood and charcoal burning mainly for sale and also for domestic purposes, these has led to the loss of habitat where the animals live causing even the death of other animals due to these factors.

Diseases affecting the gorillas, Gorillas share a total DNA of over 98% with humans making the closest relatives to humans after the chimpanzee, therefore, they are vulnerable to human diseases such as flu and cold among others and they can catch the disease for humans faster once they are exposed to the human diseases which affects the life of the gorillas since they do not have the strong immune systems to fight the disease, they find it hard to fight it hence spreading all over to other members of the family and when the disease persists, it causes the death of gorillas hence reducing the number of gorillas in the tropical forests in Africa.

Lack of awareness, lack of awareness comes in away that people have no knowledge about the benefits and the results of conserving the gorillas. The people do not know the importance of the gorillas to the surrounding communities and the societies living around the forest inhabiting the gorilla species. Therefore, the government should enforce streaked laws and provide awareness to educate the locals on the benefits of gorilla and wildlife conservation in the country, this way, the life of the gorillas will have been tried to be protected which will result to increased number of gorillas in the coming years thus boosting the tourism activities in the east African countries taking part in gorilla trekking.

Poaching, gorillas face challenging threat from the poachers living in the surrounding villages and communities near the forests, the local people set traps along the path of the animals which catch animals like the antelopes, bush pigs and others , intern, the traps end up catching and harming the gorillas that roam around the forests in search for food. In the past years, animal poaching used be so high in volcanoes national park in Rwanda during the times of Dian Fossey a primatologist who was carrying out her research on the gorillas and also tried to conserve the life of the gorillas but later, she was murdered by the rebels during the civil war that broke out in Rwanda. After her death, the government started fighting poaching of animals in the forest and now, the country is peaceful, with no cases of poaching of the animals. But there are still rampant cases of poaching in Virunga national park in Congo and mainly they hunt the gorillas due to the following reasons;

Traditional medicines, many gorillas are being poached for the purpose of traditional medicine used by the traditional healers and the witch doctors where by, they use the gorilla body parts for charms thus causing a threat to the life of the gorilla. Since this activity requires poachers to enter the forest and to kill the gorillas leading to their destruction which in long run will cause their extinction.

For bush meat, gorillas in many occasions, are also hunted for their meat, people who have tested the gorilla meat believe that its so tasty thus causing high demand of gorilla meat due to the interest of every person wanting to test to prove if the meat tests as its being said. Also, the high demand of gorilla meat in the market, gorilla meat is transported to countries like Europe thus it has increased poaching activities since the locals want to acquire income from the sale of the meat for their survival regarding the hard life faced in the country side.

For trophies, gorillas are also being hunted down for trophies, the gorilla body parts are used to show of pride, power and wealth of private individual so as to gain more respect in the community where they live in.

Pet trade, many infant gorillas are captured and sold to the foreigners who want to keep them in their homes as pet animals. The locals who enter the forest to capture the young gorillas, end up killing the mother because the female gorillas protect the young one and it’s not easily to capture the infant from the mother .therefore, the mother dies in a process of trying to protect her child from being taken away by the poachers. And when they are taken, many infants die in the zoo since they are not used to living in such areas and conditions which does not favour their survival and the food they feed on, this is also a greatest threat to the life of the gorilla hence causing the decrease in number of the gorillas in the long run. 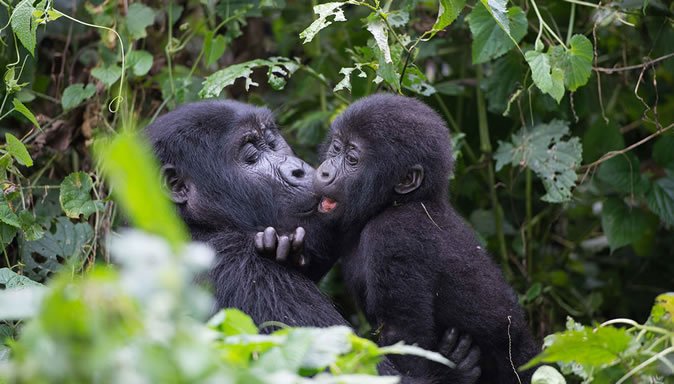 The gorilla species are one of the biggest tourism attractions in east African countries that is Uganda, Rwanda and the democratic republic of Congo but the life of the gorilla is highly affected which has led to reduction in number of the gorillas seen in the tropical forest in east Africa, due to the following factors like man-made and others being the natural factors hence calling for a need to cub these dangers if the life of the gorillas is to be conserved thus boosting the tourism industry which will bring about development.