Although Bwindi forest is a famous destination for the gorilla trekking experience and it is home to the remaining endangered mountain gorilla population, Bwindi forest is a great destination for bird watching experiences. It is situated in the south western region of Uganda covering an area of about 321 square kilometers. The park is home to over 320 bird species and about 23 species are Albertine endemic. Some of the bird species that you will spot include Archer’s Robin-chat, western green tinker bird, grauer’s rush warbler, fine banded woodpecker, handsome falcon, chestnut-throated Apalis, African wood owl, red throated alethe, chestnut-throated Apalis, ground-Thrush, short tailed warbler, African green bill, kivu ground-thrush, collared Apalis, Chapin’s Flycatcher, montane Oriole among others. While search for the various bird species in the forest you will encounter other primate animals besides the chimpanzees such as the monkeys, the chimpanzees, wildlife animals like the forest elephants, warthogs among others.

Bwindi is famous birders paradise with over 347 bird species and most of these are Albertine endemic while others are distributed in other places such as the African green broadbill, Chapin’s flycatcher, and Shelley’s crimson wing among others.  Bwindi forest is home to over 144 guinea-forest biome bird species; it has about 4 bird species of the Lake Victoria biome species.

This is  a sector in Bwindi forest that has outstanding bird species that can be spotted in big numbers at any time of the day included assorted flocks which are active during the day. Some of the bird species found in this area include handsome francolin, white tailed crested flycatcher, red-faced woodland warbler, cinnamon chested bee eater, western green tinker birds, yellow-streaked greenbuls, Rwenzori batis among others.

Birding in Bwindi impenetrable forest national park, is famous for harbouring a large number of gorillas and it’s a popular tourist destination for gorilla trekking and gorilla habituation experience. Not only that, Bwindi is also a prime destination for birding activities, the park has over 350 recorded bird species which can be spotted during bird watch excursions in Bwindi impenetrable forest national park. Bwindi is thick tropical rain forest located in south western Uganda in the district of Rukungiri, Kisoro and kabale. The park derived its name from the local word to mean ‘’darkness’’ the forest is thick with a lot of canopies and under growth trees which can not be accessed on vehicle but only on foot. Therefore, travellers visiting Bwindi, will explore the forest on foot, hiking on steep slopes. 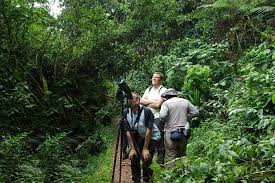 Birding safaris takes place during from morning at 8:00am to 5:00pm in the evening. You will be able to spot variety of animals, primates, tree species and many others birding is so exciting and this site is best for bird lovers since Bwindi will open you to world of birds with different bird species which are commonly spotted and those that are migratory during the month of April to November.

Birding activities take place along the main trails of Buhoma water fall trails and along the bamboo zone and Mubwindi swamp trail in Ruhija.

The birdlife in Bwindi is an all year-round experience, but at its best in the month March and September. June and July have the least rain while March to mid-May has the Heaviest rains which may interfere with your bird-watching time. The main nesting season is in May and June, with food being abundant from late May through September. This time you will get to spot a lot of birds along the trails , the swamps, savanna vegetation and in the forest.

Honeymoon in Africa
Scroll to top