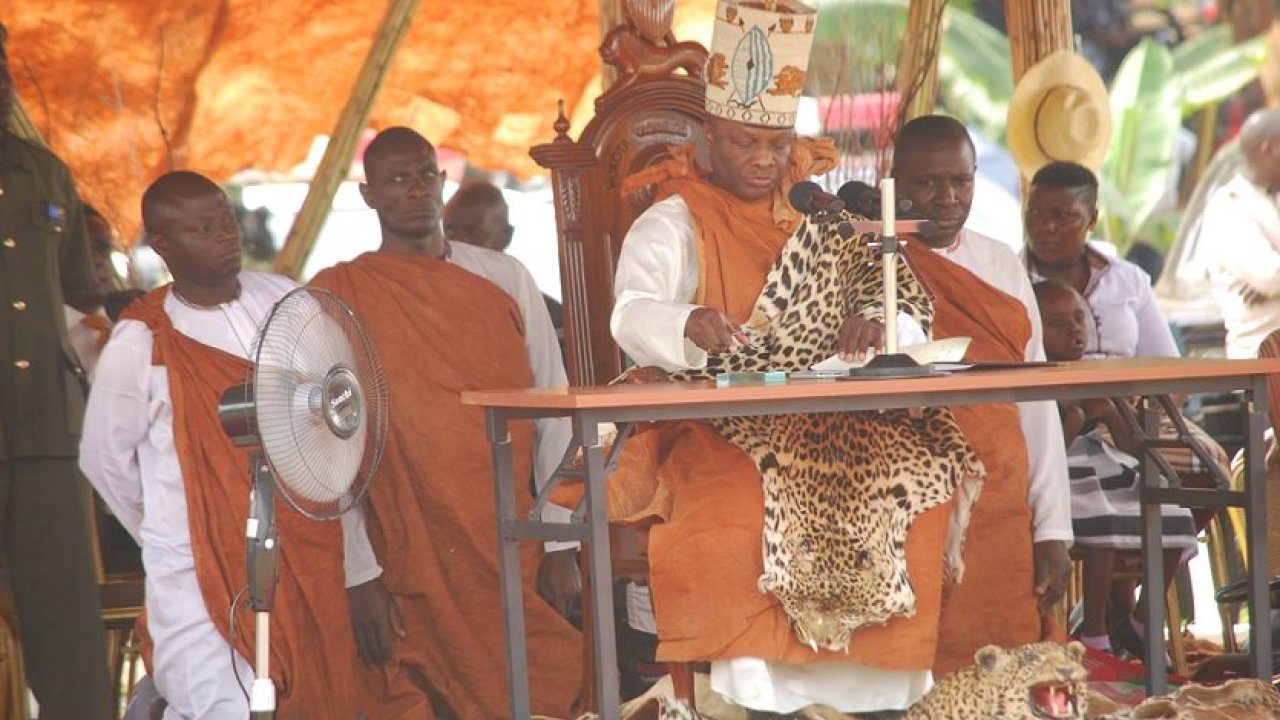 According to their traditions, the Buganda kingdom is ruled by two kings; the spiritual king and the material king. Also known as a supernatural king, the spiritual father of Buganda kingdom is represented by the Royal Drums traditionally known to them as “Mujaguzo”. Just like any other king, Mujaguzo also has his own palace, palace guards, officials and servants. When a new prince or princess is born in the kingdom, drummers from a specific clan are selected to sound these Royal Drums. This is how they communicate to the subjects of Buganda that a new member has been welcomed in the royal family. 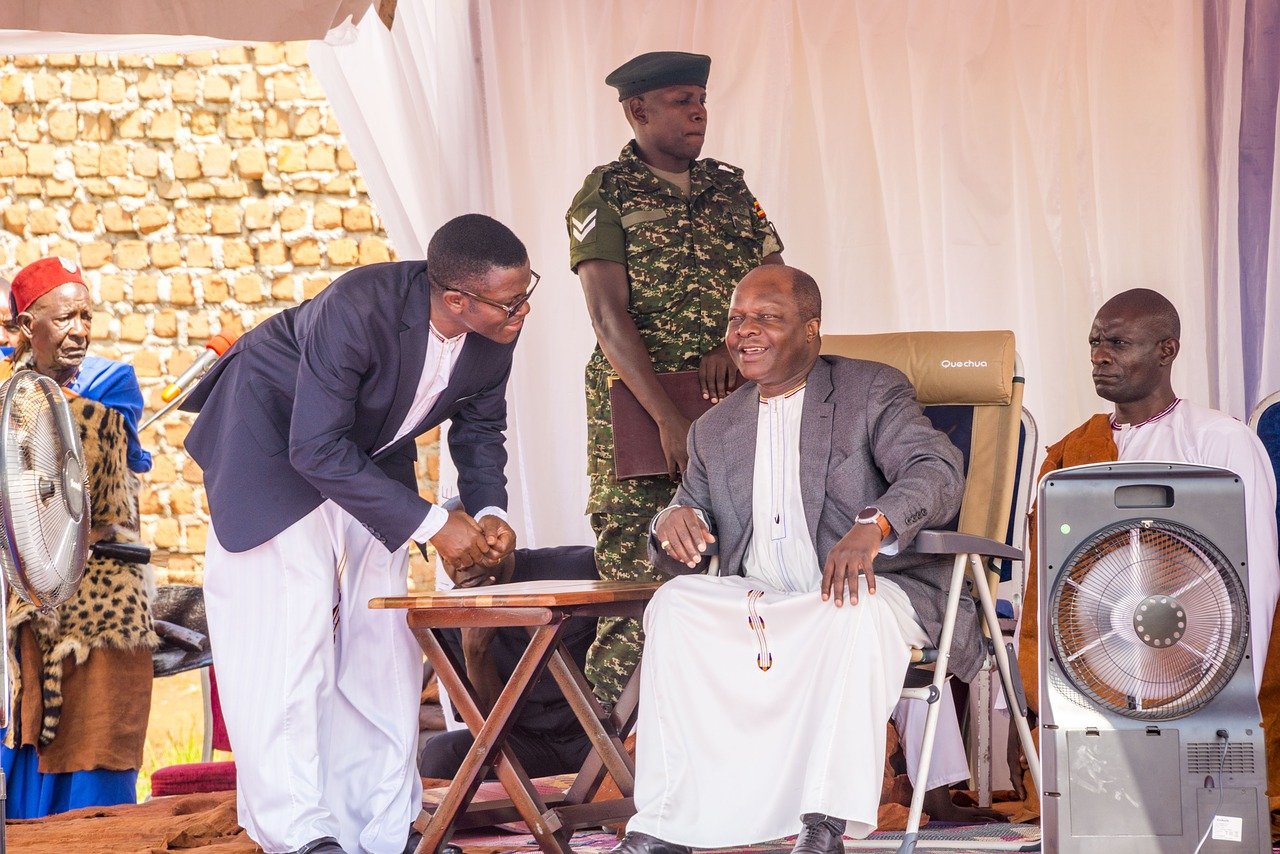 Before the officials declare the human prince as new Kabaka, he must first perform special cultural rites on these Royal drums. Sounding the Royal drums can also be an official communication that the kingdom has lost the ruling king. However, in Buganda, the Kabaka does not die but gets lost in the forest. The forest where the Kabaka gets lost is found in the royal tombs at Kasubi tombs and Wamala tombs. The Kasubi tombs are found in Kampala and are one of the areas we recommend our visitors who wish to have a cultural experience around Kampala. It has several buildings but the main hut is where the forest is found and had mausoleums of four former kingdoms of Buganda before it was destroyed by fire on March 17,2010. When you visit the tombs, you get a chance to see the entrance to the forest but you won’t be permitted to look beyond it because it is a taboo.

Princes in Buganda kingdom are treated equally if not yet enthroned as new king after the death of the Kabaka. It is however accepted for a special council of the kingdom to analyze the behaviors and qualities of the princes when the reigning king is still alive and present their recommendation to him so that he can select the one who will take over the throne when he dies. This is followed by a secret ceremony where the head of the special council offers a special bark cloth to the prince that was selected. This bark cloth will be laid on the body of the fallen king by this prince when they (all the princes and princesses) are called upon to see the body of their father. The name of this prince, the successor to the throne (king-to-be) remains a secret till this day when he will personally communicate by the act of laying the back cloth on the king who has died.

In Buganda, the firstborn prince is called Kiweewa. He is not considered among the successors of the throne to avoid attempts of assassination but he has roles assigned to him and he will have influence in matters of the royal family and kingdom.

Kabakas (kings of Buganda) that are known to have ruled Buganda kingdom from around the 14th century to date are 36 in number. Some of the popular ones in the history of Uganda are Ssuuna II who is said to have grown a traditional herb called “omulago” leading to the name Mulago that was given to one of the & hills of Kampala and Kabaka Mwanga II who killed the Uganda Martyrs. Currently, the king of Buganda is Kabaka Ronald Muwenda Mutebi II who has been reigning since 1993.

Kabaka’s Palace – Lubiri Mengo : Kabaka is the tittle given to the King of the Buganda kingdom. Traditionally the baganda are ruled by two kings (Kabaka’s), one who is physical and another one spiritual. The spiritual king is represented by their Royal Drum, the Regalia which is referred to as the Mujaguzo. The spiritual king has got his Palace, servants, officials as well as palace guards. On the other, the material or physical king has the responsibility of performing the special traditional cultural rituals on the Royal Drums before he is announced or declared as the king of Buganda. When the Kabaka or king in Buganda is born, immediately the Royal Drums will be sounded by drummers that come from a specified clan. This is a sigh of notifying the subjects about the new birth of the new individual of the Royal Drums.

On the other hand the royal drums are sounded upon the death of the king and this is how communications are done about the death of the physical king. However according to the Buganda kingdom, the king doesn’t die but rather he gets lost in the Forest.

The Kabaka’s Palace/ Lubiri Mengo is one of the tourist attractions that can be included on the Kampala city tour. This is the official residence of the Kabaka and the palace has been in existence ever since the reign of Kabaka Mwanga II who was the success of his father Kabaka Muteesa II in the year 1884.

The Kabaka’s palace also known as the Twekobe was constructed in the 1922 and this is during the Reign of kabaka/king Duadi Chwa who was the successor of King Daniel Mwanga II in the year 1887 who was exiled in the Seychelles Island. Kabaka Daniel Mwanga II left the kingdom behind without a king therefore as King Duadi Chwa was making 18 years, he was helped by Sir Apollo Kagwa, Mugwanya Stanchions and Zakaria Kisingiri’s to crown him as a rule of the kingdom of Buganda.

The Kabaka’s Palace has got four main entrance or gates but each gate has its own importance or purpose. The first Gate is referred to as Wankaci and this the main gate of the king/Kabaka of kingdom of Buganda, the queen and the prime minister who is known as the Katikiro of the Buganda kingdom. The other gate close to Wankaci and this is the gate where the king is supposed to marry a beautiful lady and he expects to find her at the Kalala gate. The third gate called Nalongo gate and this is where the king/ Kabaka receives the gifts that are brought to him. The fourth gate is called Ssabagabo gate and the kabaka uses this gate for his personal issues and here he uses his normal car secretly and one will tell that the King is moving out.

The roads that connect to the Kabaka’s palace are in mengo with only two rounds about. The Bulange road is directly overlooking the main roundabout of the main gate Wankaci and the Lukiiko. The pass which is in the middle of the roundabout is known as Nakawetwa and the route is only used by the kabaka. The Kabaka was helped by his subjects to the dig the route to the Lukiiko building which is known as Bulange and there about 56 trees that were planted on the sides of the palace and each type of tree represents a given clan in the Buganda kingdom and there about 154 trees which are found in the Kabaka’s palace, each tree has got a meaning.

The kabaka’s palace is located on one of the seven hills of the Buganda which is called mengo hill one of the 7 hills of Kampala. Hill has got a lot of attractive features such as the fire entrance point that is kept burning throughout the day and night, the torture chamber where the late Idi Amin tortured about thousands of people up to death.

At the main entrance of the kabaka’s palace has a fire point which is supposed to be keeping burning both day and night and the person who is responsible for lighting must come from the Nyonyi Nakisinge which is a bird. The kabaka’s palace is one of the key attractions that you can explore while on a Kampala city tour and enjoy pleasure visit to the Kabaka’s palace, you will get chance to see the Admin torture chamber found within the palace. 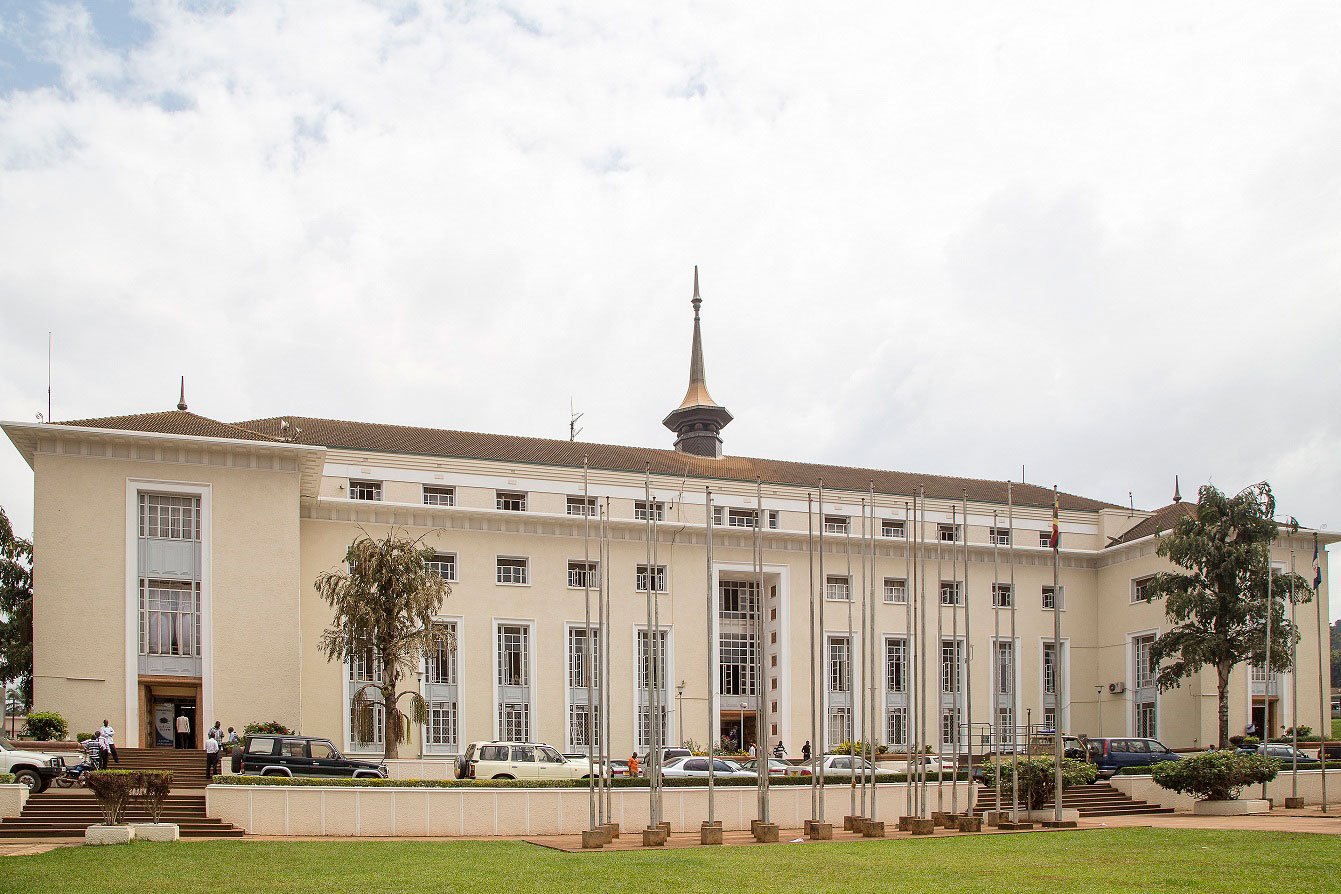 The Buganda Lukiiko or Parliament is housed at Bulange Mengo

Bulange Mengo is one of the true prides of the kingdom of Buganda. It is situated on one of the baganda hills and it is adjacent to the Kabaka’s palace which is located on Namirembe hill. Bulengo mengo is the parliament as well as the Administration building of the Buganda kingdom. A straight pass of Kabaka Anjagala road is facing directly from the main entrance of the palace to the main entrance of the parliament which is also called Bulange and this is the perfect place where you will more about the history of the Buganda kingdom which is almost the same as that of Uganda.

The bulange mengo/ parliament where traditionally the Prime ministers (Katikiro), other ministers, chiefs and the Kabaka would hold their meetings with in the palace or under one of the trees in the palace and as time went by, they decided to construct a grass thatched conference center which served as the parliament and by the 20th century, the prime minister of the Buganda kingdom by then who was called Sir Apollo Kagwa decided to establish a brick parliamentary building which influenced the construction of the Buganda parliament called Bulange in the year 1955 together with the plans of the Ssekabaka Muteesa II after he had returned from exile who copied the a similar building style from Scotland which he had admired. The construction of the bulange mengo was completely funded by the Buganda government and construction was completed in the year 1958. Ever since then, it became the Administration capital and Parliament of the Buganda kingdom.

This Bulange building is found in the piece of land which was once owned by the First British Police and it was formerly referred to as Namirembe. The parliamentary building has got only one floor which is sited on the head of the king culturally. And the name Bulange was given to the Parliament Place due to a certain weaving grass that used to grow on that hill.

On the bulange building, you will see about 56 clans of the Buganda kingdom where each is represented by a symbol and their importance explained. With the guide’s knowledge about the Buganda culture, he will explain to you the values of being part of a given clan.

In the ancient days of 1966, Uganda as a whole country encountered a political disorder which led to the invasion of the Kabaka’s palace and finally captured. During this period, Obote II wanted to do away with cultural institutions. Therefore he turned the Buganda parliament –bulange in the Uganda Army Headquarters. However credit goes to the National Resistance Movement that played a big role in restoring the back the cultural institutions thus Bulange was given back to the Buganda kingdom.

However though this was done, there were restriction and conditions attached and although the parliament of buganda commenced with its duties, there were a lot of limitation of how they are going to operate and perform their duties. From then the Buganda kingdom became a legitimate monarchy and the Buganda parliament was only supposed to legislate cultural laws as well as handling its own development issues but were not allowed to influence a political issues.

The Buganda Lukiiko / Parliament was made up of 68 appointed political members elected from the counties, the 6 members were chosen by the Kabaka, the 8 members were county chiefs of Buganda, and the rest were cabinet ministers of the Buganda kingdom. The Prime minister plus the king had their own offices along with the ministers.

When you explore the bulange parliament, you will have an opportunity to support the works of the Buganda kingdom and this is through buying certificates which vary in price and they range from 5000 to 100,000 shillings. There is a local bark cloth shop with numerous art items that will help you learn and understand more about the Buganda culture plus it interesting history, this include the guides, historical books, the royal drums among other art and craft item. You will guide by your guide how to dress up before you are allowed to enter this cultural place.