Chimpanzee trekking in Congo is done at Virunga National Park.  you can also visit virunga national part for these amazing experience in chimpanzee trekking. Chimpanzee trekking safari is yet another activity that has attracted many tourists to the country to explore a number of attractions and different wildlife species. Chimpanzee is a big ape genus endemic living in central Africa’s trees and savannah, monkeys and other sub species that live in the tropical moist forest, grassland-forests, mosaic and savannah woodlands of the Democratic Republic of Congo. The chimpanzee lives in the eastern tropical forests and the common subspecies of the chimpanzee include the Eastern chimpanzee which ranges from the Ubangi River in the Central African Republic of Congo, to western Uganda, Rwanda and Tanzania. Proof from fossils and DNA testing suggests that chimpanzee family are the nearest living relatives to human beings. Chimpanzee range on different behaviours and live in groups of about 20 to 80 members, chimpanzees are mobile and they move on the ground but in most times during day, they prefer to live on trees jumping from one tree to another as they interact with one another, chimpanzee are very social primate species to humans unlike the gorillas. They live in groups with the dominant male as the leader of the family, the male leader offers protection to the family, providing food and shelter for the family members.

Chimpanzee in Congo are one of the most famous animal species that travellers look out for in the wilderness during their Congo Safari tours. Which as become of the famous activities although mountain gorilla trekking is one of the biggest primate safaris which is only in three east African countries namely Virunga in Congo, volcanoes national park in Rwanda, Bwindi impenetrable forest and Mgahinga national park in the Uganda. With a bout 1000 gorilla species left in the world and distributed on these national parks, which has attracted a lot of tourists for gorilla trekking. However, Virunga national park, has a hidden gem of chimpanzee of habituated groups that can be visited by the travellers having interest in chimpanzee trekking in Congo. 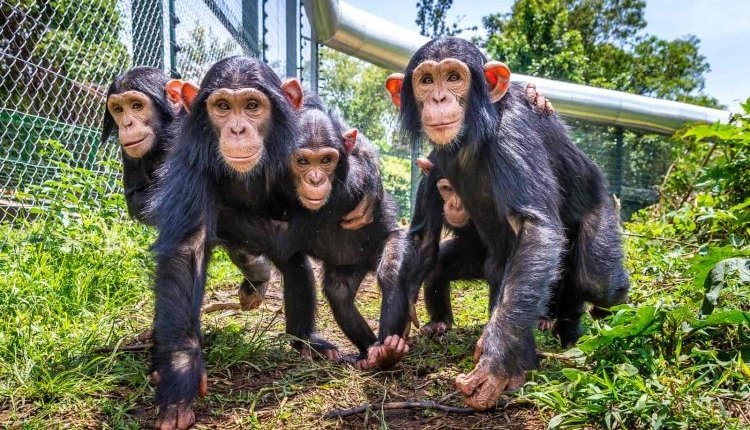 Chimpanzee habituation process in the democratic republic of Congo, started in 2014 by a Congolese team trained by the Frankfurt Zoologist Society embarked on the journey to habituated the chimpanzee groups living in the Virunga national park with the team of trained people to take part in this activity. Chimpanzee habituation process, takes place in Tongo forest one of the protected areas in Virunga National park with a number of 32 members habituated in this area. These has enabled travellers taking part in chimpanzee trekking to located the chimpanzee easily during the trek in the forest. Travellers on chimpanzee trekking, are advised to book accommodation closer to the trekking location since the activity starts early morning at 6:00 am with the visit at the park headquarters. Unlike gorilla trekking, which allows 8 people, chimpanzee trekking only allows 4 people only to trek the chimpanzee for a period of one hour with the chimps. During chimpanzee trekking, visitors who are ill or having chronic diseases will not be allowed to trek the chimps to avoid transferring infections to the chimpanzee since they are vulnerable to human infections.

Lwiro Chimpanzee Sanctuary; is one of the primate sanctuaries that is gazetted to protect the life of the chimpanzee, the sanctuary is situated in south-eastern part of the Democratic of Congo in Bukavu town. The sanctuary was established in 2002 by the Congolese institute for nature conservation and National Centre for Research in Natural Science. This place is one of the best homes to protect the chimpanzee and one of the best places for chimpanzee tourism in the Democratic Republic of Congo.

Jeunes Animaux Confisques au Katanga (J.A.C.K) is a home to over 35 young chimpanzees aged between 5 to 15 years old, the sanctuary keeps over 17 females and 18 male chimpanzees. Jeunes Animaux Confisque au Katanga is located in Lubumbashi city in the democratic republic of Congo. Travellers on chimpanzee trekking, can always visit this sanctuary since its always open to visitors and the public for education purposes.

There several accommodation facilities in Congo put in place for travellers taking part in chimp trekking, the lodges are situated closer to the sanctuaries since it requires an early morning rise for the start of the activity due to the fact that, chimpanzee trekking as well as gorilla trekking start early morning. The lodges range from luxury, mid-range and budget lodges to meet the interest of the visitors.

Kibumba Tented Camp; Is situated within the park and comprises of 18 tents with comfortable accommodation offering best services ranging from bar and restaurant serving the best dishes both local and international dishes. The lodge is situated in area that offers the best spot to go for chimpanzee trekking and also offers an opportunity to client who want to do hiking activity to hiking in Mount Nyiragongo.

Bukima Tented Camp; Located near the boundary of the Virunga National Park, the lodge offers luxury accommodation for guests. The Bukima Tented Camp site gives guests a specular view of Mt. Mikeno whose peak goes up to the division of chimpanzees and the red glow of Mount Nyiragongo lava lake.

Lulimbi Tented Camp; is located in the eastern part of Virunga National park in Ishasha sector in queen Elizabeth national park the region is dominated by the savannah plains which harbours a lot of wildlife species that has enabled guest to have great views of wild life species like elephants, buffalos, warthogs and others  and they are spotted mostly during the game drives along the southern sector of Virunga national park.

Mikeno lodge; the lodge has about 12 rooms at the lodge each with unique setting and nears the spot where hiking munt Nyiragongo and chimpanzee trekking activity kicks off from. Mikeno lodge offers excellent restaurant serving both indoor and outdoor dining, with a complimentary breakfast and additional meals. The lodge is situated an area surrounded by forest which offers guests pleasant sounds of the different bird species.

Source of the Nile

What Should I do If A Gorilla Charges?
Scroll to top