Hike to the Dian Fossey Tomb is among the popular safari activities performed by many travellers who come to visit the Volcanoes National Park in Rwanda mainly to do  for a gorilla trip, The hike includes a 30-minute drive from the park headquarters to the trail head for access to the Karisoke test camp where tourists stroll to the park border for about 10 minutes. Walking from the park boundaries to the Dian Fossey gave, takes approximately one and half hours, the trek involves passing through the forest which offers beautiful views of many attractions. You will spot several animals like the forest hogs, forest elephants, several primates and different bird species which makes the walk to the Dian Fossey even more adventurous. 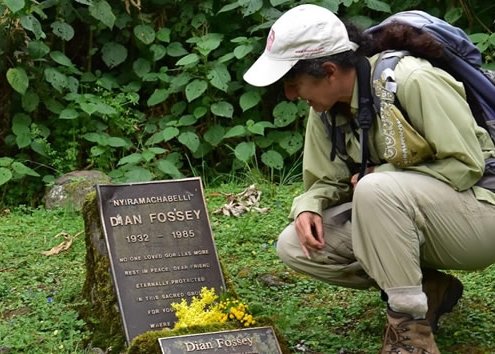 The hike to the Dian Fossey is an unforgettable experience that someone encounters when you step foot in this tomb, it’s both physically, emotionally and intellectually but also It’s so inspirational to learn about someone who has been so deeply committed and dedicated her life in conserving the life of the gorillas in their natural habitat, when she died, she still has left a legacy that even today still exists. The walk involves moving through the woods and climbing the hills, needing a degree of endurance and flexibility for one to be able to hike the steep slopes.

The trek to the Dian Fossey tomb allows to learn more information about the conservation history of Dian Fossey as protagonist and conservationist in the world. You will also see the nearby gorilla cemetery which is now located in the formally known as Karisoke research camp. Today, travellers able to view an increasing number of gorillas in their natural habitat but all this is credited to the effort of Dian Fossey who lived her in conserving and protection of the gorillas.

As you walk towards the site, you will find the house from where Dian Fossey was mercilessly murdered in 1985 and she was buried next to her friend digit and several other gorillas that died due to poaching or might have suffered illness, the gorillas that she worked so hard to conserve their life in the forest. The circumstances that led to her murder still remain mystery but it’s believed that the murder could have happened due to the reason hat she had devoted her self to see poaching come to un end and protect the gorillas. Following her sad ending, Dian Fossey’s reputation and success continues, and her popular book Gorillas in the Mist was eventually made a film portraying her personal life and dealing with the gorillas you don’t want to miss to watch this. This film shows how she was devoted in her work and truly it wasn’t in vain even with her death, her history still lives. The Dian Fossey fund foundation still works in the conservation of the gorillas where they are running several projects which have help to protect the life of the gorillas. Which has led to an increasing number of the gorillas living both in forested and mountainous forests in Uganda at Bwindi impenetrable forest and Mgahinga forest, volcanoes in Rwanda and in Virunga forest in Congo.

In many occasions, hiking to the Dian fossey grave is one of the complements to other popular activities that has drawn visitors in Rwanda including; gorilla trekking Rwanda, golden monkey trekking, Volcano hiking, visit to the Musanze caves and visit to the twin lakes of Bulera and Buhondo twin lakes.

What is required for Dian fossey Hike?

Hiking to the Dian fossey grave is not as much easy as you may know though it not as strenuous as king the volcanoes, but requires on to be physically fit since it’s a bit tiresome to hike on steep slopes. The walk takes about 1-3 hours from he starting point and depends on one’s fitness and ability to hike. Travelers are also encouraged to wear hiking boots to resolve the muddy and slippery grounds particularly during the rainy season, in order to ease the movements. Likewise, dress in long pants, which you will address to stockings to avoid bites from insects on the field and be harmed by stinging nettles.

As with any other popular activity in the Volcanoes National Park, including gorilla trekking, golden monkey trekking among others, all participants in hiking to the Dian Fossey Cemetery are expected to have a valid trekking permit, you are also encouraged to carry other relevant travel documents, for clarification, such as passports. Ironically, Dian Fossey Graveyard Hike has a relatively low cost of 75usd which is worth paying for compared to other activities such gorilla trekking which costs $1500 per person. Travellers taking part in this hike, can access the permits on the actual day of hiking at the Karisoke Research centre. join in the Dian Fossey grave yard stroll, and have more satisfying memorable experience on how she lived her life in conservation of the gorillas.

The twin lakes of Burera and Ruhondo