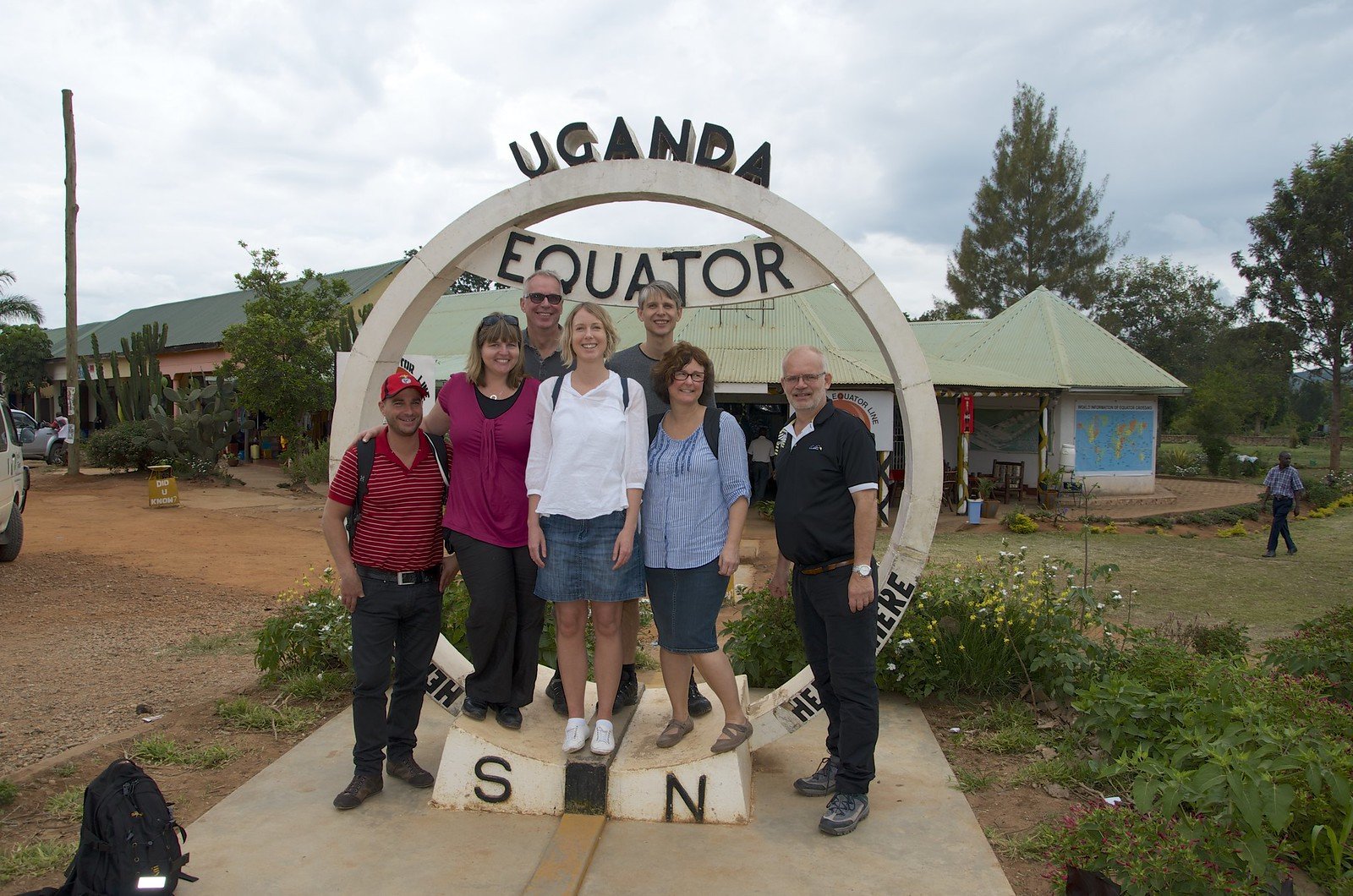 Where does the equator pass in uganda

Visiting the equator, is one of the unique experiences you shouldn’t miss in Uganda- the Pearl of Africa, the primary Destination for Equator in Uganda, is on the Kampala—Masaka Road. many travellers Africa visiting various national parks in western Uganda have a stop over at the equator when heading towards or returning from Bwindi impenetrable forest, Mgahinga Gorilla national park, Queen Elizabeth National park, and lake Mburo National, lake Bunyonyi you will have enroute stop over as you relax from the long trip and take some photos and enjoy some of the exciting activities at the equator including Balance an egg on a nail at the Intiman Solar Museum among others.

Uganda is one of the few countries in the world where the line of equator runs through it, while in Uganda, do not miss this exciting experience visiting the Equator. While on the safari in Uganda, Equator is the perfect lunch stopover enroute to Bwindi impenetrable forest, Mgahinga national park, Lake Mutanda, lake Bunyonyi and Queen Elizabeth national park.

What is the Equator: Is an imaginary line drawn on the earth’s surface and divides the earth in to two regions that is the Northern and the southern hemispheres? Equator is also the line of 0 degrees.

During your visit at the Equator you can balance with one foot o the southern hemisphere and the other foot on the Northern hemisphere, or stand with both legs on side of the earth, the person standing with legs of different sides, will feel lighter but it does not mean you have lost weight reason being that.  At the equator the gravitational force of the earth, is significantly less than at the poles. when you leave, your weight returns to normal but it will reduce by 3 percent.

The climate and the temperatures around the equator are warm and humid and experiences a lot of rainfall especially during the winter season of the year, the temperatures are not varying or changing all throughout the year, which is one of the perfect places you ought to visit. Uganda’s climate is pleasant and Unique from the rest of the world. At the equator, the sun is over head at noon and experiences equal hours of the day and night due to the refraction of the sunlight. The water at the equator, runs down counter clock wise in the Northern Hemisphere and clockwise in the southern Hemisphere due to the effect caused by the earth’s rotation on moving objects.

The Equator in Uganda:

The Equator is located in Kayabwe, Mpigi District approximately 72 kilometres from Kampala city, while driving south west of Kampala, you have an opportunity to see the poster of the Equator on Kampala-Masaka road about 420 kilometres from Kampala. Its has become ne of the top places to visit while in Uganda and must see and do safari Destination for visitor and visitors in western Uganda.

Its also one of the unique places, you will fine restaurants, and shops displaying Souvenirs you may need to purchase some items that you wish to go back with to your home country, the best Ugandan product, the Equator has always received many visitors all year round, it’s the must stop over for many visitors to or from western region of the country.

Some of the shops here were set up by the NGO’s and the many raised through sales, is invested for the support of the children that are under the NGO, therefore your participation in buying these items such as art and craft , is a way of extending your service to the needy.

Things to do at the equator

There is a variety of art and craft and souvenir sold in craft shops at the Equator, most of the items here are hand made products by the locals found in this area, you can purchase a T-shirt printed as ‘’ I crossed the Uganda Equator’’.

It’s a beautiful place where you can find Africa craft especially Uganda crafts. The market is accessible and well secure, ATM around and forex bureau just at corner. You don’t have to worry about the difference in currency, you have all it covered there is a forest bureau where you can change your money from.

While here at the Equator, there are also two restaurants one located at the Tribal craft shop, and the other at the Child Aid café. You will find delicious food and coffee, but the food prices here, are slightly different from other places. Reason being that the money is generated to support the needy children.

When you book your safari with us at Adventure in the wild safaris, you will not miss visiting the Equator while on your safari trip in western Uganda.

These explains that objects with the part nearer to the equator, deflect further and faster than the part nearest to the Equator the south and the North pole, the Coriolis effect, also causes weather systems like Hurricanes to move in different directions in different hemisphere.

There is also an experiment where you will see many visitors, tourists balancing an egg on a nail, many people believe that its only on the Equator where you can balance an egg on the nail and nowhere else. Due to the effect of Coriolis with stronger gravity at the Equator resulting to the altitude.

Gorilla trekking in the dry season
Scroll to top