The Gaddafi Mosque, also known as the National Mosque of Uganda, is the biggest mosque in East Africa, situated about 2 km from the middle of the old Kampala Hill, one of the seven hills in Kampala, Uganda’s capital. The building of the Gaddafi Mosque started in 1972 after the establishment of the Muslim Supreme Council by Uganda’s state, and the Mosque was then renamed as the Old Kampala National Mosque. However, in 1976, the building of the Mosque halted until in 2001, when Ugandan Sheik Mufti Shaban Ramadhan Mubuye extended his earnest request to Colonel Muammar Gaddafi, the late former president of Libya, during his trip to Uganda to help in the construction of the Mosque, and his request was approved and hence the reconstruction of the Mosque resumed and was completed in 2006. The completed mosque was officially opened in June 2007 under the name Gaddafi National Mosque, and hosted the head offices of the Uganda Muslim Supreme Council. In 2013, after Colonel Gaddafi’s assassination, it was dubbed “Uganda National Mosque,” as the current Libyan government was un willing to rehabilitate the mosque under the old name.

The Gaddafi Mosque seats up to 15,000 worshipers and can hold another 1,100 in the gallery, while the terrace will cater for another 3,500. Colonel Muammar Gaddafi of Libya commissioned the mosque as a gift to Uganda, and for the benefit of the Muslim population. Uganda has many mosques but the Gaddafi mosque is the biggest in East, Central, and Sub-Saharan Africa. The Mosque consists of a conference hall, library, hospital, University and a radio station.

Particularly in comparison to other mosques in Uganda, Gaddafi Mosque is a skyscraper and hosts the headquarters of the Uganda Muslim Supreme Council on the ground level, the national religious advocacy organization for all Muslims in Uganda .And its main objective is to reach out to all people despite their different levels, as well as taking care of  Islamic matters in Uganda and on the upper floor, is where the Muslim congregation seats during prayers ,the mosque is situated there.  The Gaddafi mosque houses the Uganda Mosque head’s residence and office, Mufti is a religious scholar who determines legal avenues and perceives the Sharia or Islamic principles.

The Gaddafi Mosque, sits on 12 acres of land merging as one of the biggest Mosque in Africa with the tallest Muezzin from where Muslims call their fellow religious affiliation for prayers. The mosque was built in a contemporary vibrant form with a beautiful element of interior art and has been designed focused on Western, Arab and African contact cultures. The mosque serves as one of Kampala City’s distinctive tourist destinations. It is open to all visitors, irrespective of once perspective, political allegiances, cultural identity, ethnicity, colour among others. During any of your safari tours around Kampala city, do not miss pay a visit to the Gaddafi Mosque its one of best places with a magical experience.

There is a high number of visitors received at the Gaddafi mosque every year from different countries, background, religions among others to explore the beautiful interior and minaret of the Mosque. The fact that it was commissioned as a gift to Muslim fraternity in Uganda, visitors have the interest to visit this place and prove if what is written about the mosque truly defined the structure its self. Visitors who come to the Mosque, will asked first to go to the front desk to pay for the entrance fees before accessing the mosque. You will then be provided with professional guide who knows everything containing the mosque and will take you around. Women visitors will be advised to ware loose-fiiting clothes covering your waits and the ankles and veils for veiling their heads in case you do not have one, you will be provided and thereafter return it back. For the men, they will ware log sleeved shirts and trousers. The guide will take you around the mosque where you will be able to view the beautiful art and architectural design in the main hall which will offer you great scenic views of the seven hills in Kampala city. 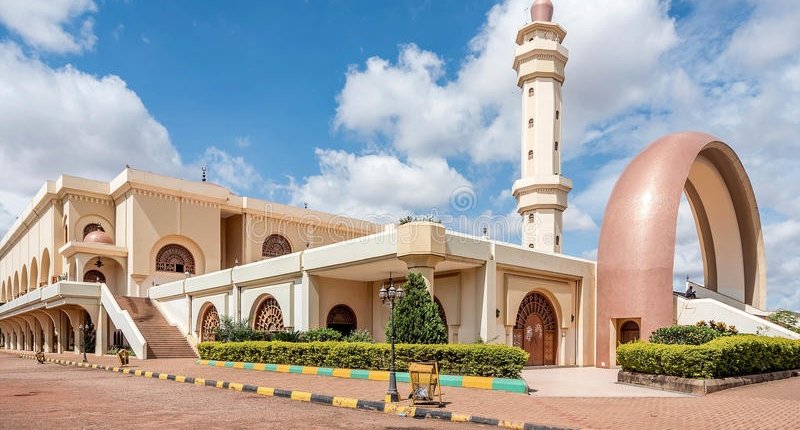 The best time to visit the Gaddafi Mosque

The Gaddafi Mosque is open to visitors throughout the year, meaning that the beautiful Gaddafi Mosque can be visited any time and any day through out the year. But the most appropriate time to visit is during the dry season when there is little or no rain fall in Kampala because it will require one to walk around on foot in order to explore the depth of the Gaddafi mosque. The dry season is from the month of June, July, august, December, January and February, these months are recorded to be having light drizzles or no rainfall received at all.

Gaddafi Mosque is a massive tourist vacation spot, strategically positioned, providing stunning views of Kampala City. The mosque is designed in majestic architectural systems, rendering it a must-see location for tourists to enjoy the best experiences while on a safari tour in Kampala City.