Mountain gorilla trekking is one of the major key activity that attract a lot tourist although the park is a home to other unique wildlife species such as the endangered forest elephants, the buffaloes, antelopes as well as other primates such as golden monkeys, the olive baboons, the red tailed monkeys, the white and black monkeys, the blue monkeys, L’Hoest’s monkeys among others. 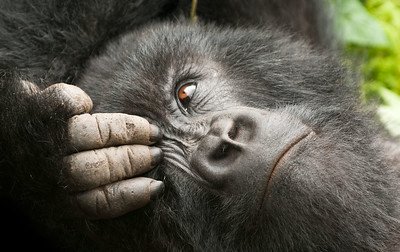 For a very long time Virunga national park has been affected by the political wars in the Democratic Republic of Congo which have threatened gorilla tourism in the country due to fact that the wars affected the mountain gorilla populations as well as rare animal population. The political situation in Virunga national park was worsened by the killing of the park rangers (about 175 rangers killed) who had volunteered to protect the endangered mountain gorillas and other wildlife as well as ensuring the safety and security of all tourists who visit the park.

Since 2014 when Virunga national park was re-launched for tourism, the park has been receiving a lot of travelers over 17, 000 tourist, however the recent political threat led to closing for the park so as serous actions of safety and security can be taken by the government. This happened in May 2018 where two Briton tourists together with their park ranger and the drive were kidnapped in Virunga national park and the park ranger was killed as he was trying to save the life of the tourists, the driver was wounded and the two tourists went missing for an overnight. This was a serious incident that led to the closing of Virunga national park until 15th Feb in 2019 when the park was reopened for tourism once again.

During the reopening of Virunga national park, the park director Emmanuel Demerode gave reclaims about the political stability of the park and measures being taken to insecure the security and safety, saying that they have taken their time make sure that they improvement on the security of the tourists as well as deploying a lot of military forces all over the park to ensure that travelers are safe and to protect endangered mountain gorillas among other wildlife.

In synopsis, it is important to note that Virunga national park is the oldest national park in Africa and it is dominated by the largest tropical rainforest that receives rainfall throughout the year thus its evergreen vegetation and the endangered mountain gorillas are surviving in the high altitude areas of the forest. Although the mountain gorilla population has been affected by the political wars they have tried to recover thus they are over 500 mountain gorillas that are found in the park and there about 8 habituated gorilla families that are open for gorilla tourism throughout the year. As the security and safety of Virunga national park has been improved, the park has become one of the best and famous destinations to enjoy the life time gorilla trekking adventure in Africa ever since the reopening in February 2019 update and travelers are more safe as long as they follow the instructions of their guide throughout the end of their safari.

Chances of seeing the Mountain Gorillas
Scroll to top