The Kalahari Desert is a large semi-arid basinlike sandy savannah plain covering about 360,0000 square kilometers in the southern part of Africa. The desert occupies a large part of Botswana, the eastern part of Namibia and the northernmost part of the Northern Cape province in south Africa. The Kalahari Desert is unique from other deserts as it receives high amounts of rainfall annually. However, the sand covering the area immediately absorbs the rain. The name Kalahari came from the Tswana word Kgala meaning “great thirst” or Kgalagadi meaning “a waterless place”.

The Kalahari Desert is the 6th biggest desert in in the world, and the second biggest in Africa after the Sahara Desert. The western part of this semi-desert has beautiful rolling sand dunes which measure length of about one mile, hundreds of feet in width and about 20-200 feet high. The soils in this area mainly sand, brown-reddish sands that are very dry.

Kalahari Desert is actually not a desert but a semi-desert. For a place to be called a desert, it should be receiving less than 250 millimetres of rain annually. The driest areas of Kalahari Desert receive 110-200 millimetres of rain annually and areas that receive the highest amount of rain get up to 500 millimetres a year. Temperatures in the Kalahari Desert are usually very high during summer and can go as high as 45 degrees Celsius and very low during winter. At night, the temperatures can lower down to zero degrees Celsius at night during the winter season. There are numerous pans that are filled with water during the wet season and these attract a lot of animals where visitors watch them during their safaris. 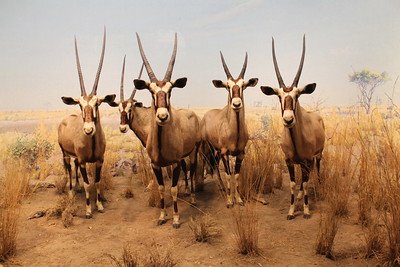 Kalahari Desert is a dry place but amazingly has a wide range of flora. The only place that has few trees and shrubs and some parts don’t have any vegetation is the southwestern Kalahari that is the southeast of Namibia, southwest of Botswana and northwest of south Africa. Some of the types of plants here are tsamma melons, gemsbok cucumbers and hoodia cactus.

the central part of Kalahari has more vegetation because it receives more amounts of rain. The north and eastern parts are also covered with more vegetation compared to the dry southwestern.  Common plants and trees in these areas include acacia trees, camel thorn, devil’s thorn flower, shepherd’s tree, silver cluster-leaf and kiwano fruit among others. These plants flourish after the rains and make the area a great grazing place for the animals that live around the semi-desert.

The semi-desert is a home to a variety of birds and animals which have the adaptations to the environment and its weather. More wildlife is in the northern parts than the southern because it receives more rain and therefore more vegetation to support the animals. Animals found in Kalahari Desert are wildebeest, duiker, gemsbok, African wild dogs, kudu and big cats including cheetah, the black-maned Kalahari lions and leopards. Here you’ll also see animals that live in deserts such as cape fox, brown hyena, meerkat and bat-eared foxes. It is also a home to reptiles such as puff adders, cape cobras and different types of lizards and amphibians such as the tremolo sand frog and bushveld rain frog.

There are three main game reserves in the Kalahari Desert; 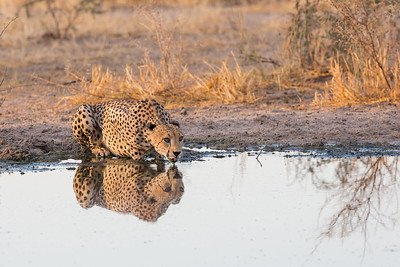 This park is a combination of Kalahari Gemsbok national park in south Africa and Gemsbok national park in Botswana. This park is a perfect destination for watching animals since they can be spotted from a distance. Animals in the trans frontier park include lions, leopard, gemsbok, springbok among others. Activities of the park are game drives and nature walks. Of these two national parks, the southern part in south Africa gets more visitors due to the great facilities than those in Botswana.

Just like its name says, this park is located in the central part of Kalahari. It is the biggest reserve in Botswana and a typical wilderness destination. It has few animals which include the Oryx, wild dogs, the Kalahari black-manned lions, cheetah, springbok among others. The area is plain and these animals can clearly be viewed once spotted. Activities of the park include game drives and evening and night game drives.

The best time to visit is during the wet season from November to march when animals can easily be seen gathering around pans.

This park is located close to Central Kalahari game reserve and can easily be accessed from Gaborone. The population and variety of animals is lower than that of Central Kalahari game reserve. Most visits to this park are primarily for scenic viewing of the landscape and enjoying the isolation from crowds in towns. Animals in Khutse game reserve include gemsbok, springbok, kudu, hartebeest, giraffes and there are also big cats like lions, leopards and cheetah. The black-backed jackal is the commonest predator in the game reserve.