The Rwenzori Mountains are the highest in Uganda and third highest in Africa with the highest peak being a height of 5,109m above the sea level. They are located in western Uganda on the border with the Democratic Republic of Congo. The mountains are famous for their ranges that are normally covered by glaciers throughout the years and are also source of several rivers that flow through the region to the lakes. Rwenzori Mountains have some of the best hiking trails that you can enjoy while on your Uganda Safari.

Mount Rwenzori is one of the UNESCO World Heritage sites in Uganda and the eastern part of it is protected by Rwenzori Mountains National Park while the part in the DRC is protected by Virunga national park. the Rwenzori mountains are made up 6 ranges namely; Mount Stanley where we find the tallest standing peak at 5,109m known as Margherita peak. Other ranges include Mount Speke (4,890m high), Mount Baker (4,84m high), Mount Emini (4,798 high) and Mount Gessi (4,798) and Mount Luigi di Savoia which elevates at4,627m above the sea level.

Mount Rwenzori is also known as the “Mountains of the Moon” as it was described by an Alexandrian geographical researcher and photographer known as Pletomy because of the beauty of the mountain. In Uganda, the mountains of the moon stretch from Kasese, Kabarole to Bundibugyo and as you drive from Fort Portal to Kasese or vice versa, you’ll have the spectacular views of the ranges all way through.

Getting to Rwenzori Mountains national park

Hiking through the trails on Mt. Rwenzori is one of the most amazing experiences you’ll have on your Uganda safari as you go through varying vegetation and climate along the elevations. 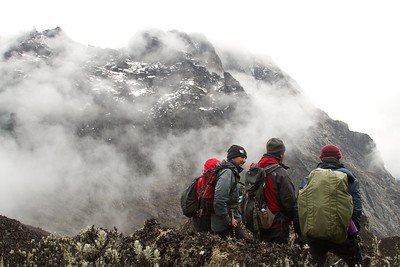 Vegetation types vary from tropical rain forest, bamboo forests, montane cloud forest and the alpine vegetation after which you’ll arrive at the glaciers on the peak. There are wooden huts at different camps where you’ll be spending your nights. Along the way, variety of wildlife will be spotted including monkeys, birds, featured by wondrous landscapes of waterfalls, valleys and vast views of the areas on the foothills including farmlands, towns and lakes at a distance.

The Rwenzori mountains are home to over 200 bird species and some of them include the Rwenzori Turaco, the Long eared owl, , the White-starred Robin, Handsome francolin, Archer’s Robin-chat, Blue headed sunbird and many more. Some of these and more you’ll spot as you hike.

Hiking to the top of the Rwenzori Mountains and back to the bottom takes about 8 days and the famous trail is the Nyakalengijja trailhead whose starting point is located about 22 km from Kasese town.

Other things to do at Mount Rwenzori

You can go birding in the forests on the foothills on the mountain where you’ll spot a variety of birds.

Uganda has diverse cultures and one of them can be learned about from people that live on the foothills of the mountains. You’ll watch them carry on their daily activities of cultivation and traditional dances and you also have an opportunity to get to know about the ancestors of people living around the mountain.

Hiking on the Rwenzori Mountains can be combined on your chimp safari to Kibale, your gorilla and wildlife safari to Bwindi and Queen Elizabeth national park or Semuliki national park. This will make one of the most remarkable tours of an African safari.

The Rwenzori Mountains can be hiked any time of the year but the best time is during the warmest and driest months since trails become muddy and it gets much colder during the wet months. Drier months are December, January and February and June, July, August, September and October. Following the previous weather and climate, the region experiences rain during the rest of the months with the longer wet season being from March to May and the shorter one in November.