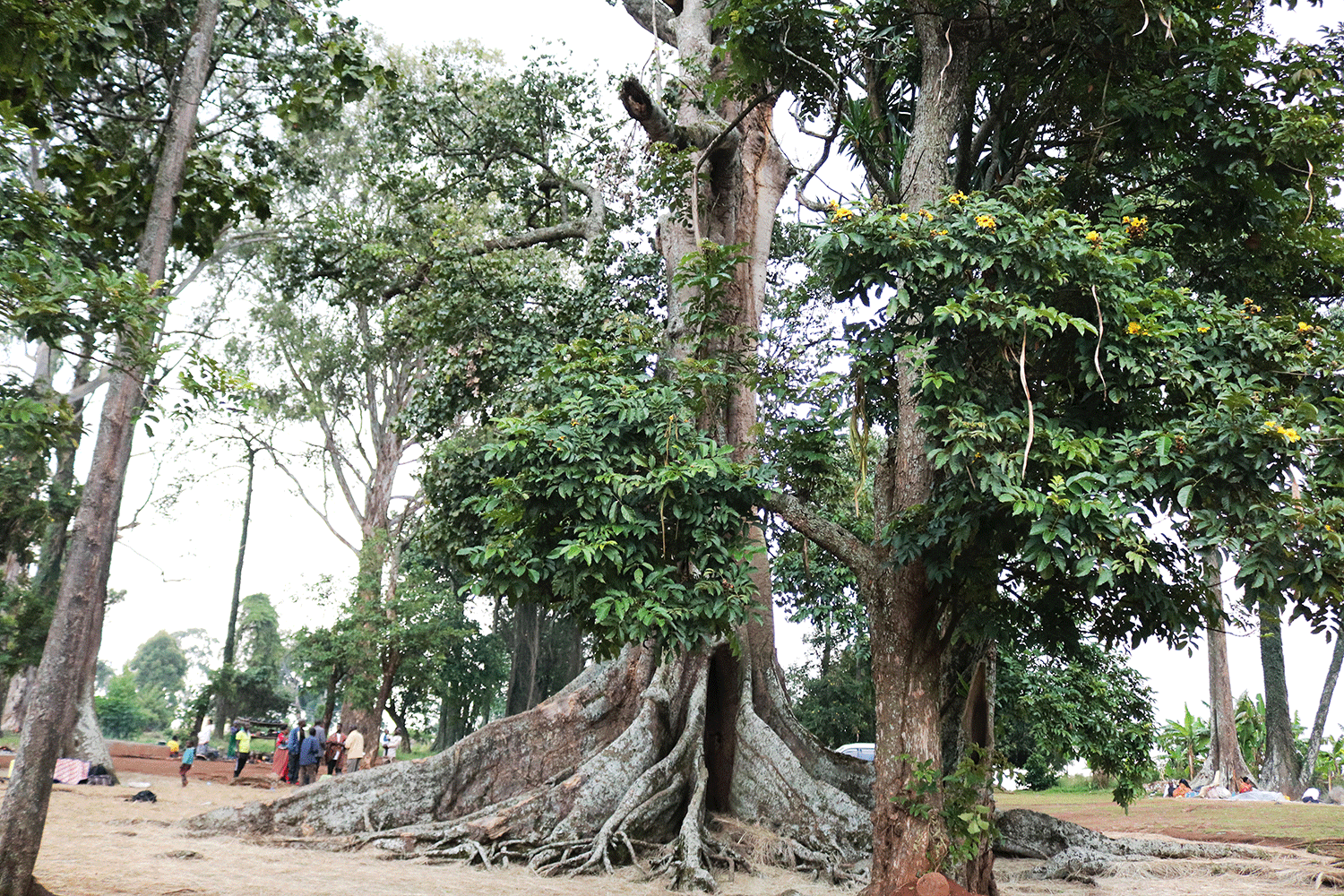 The Nakayima tree is located in Mubende hills and it is one of the oldest trees of the ancient times. The tree is believed to be approximately 400 to 500 years of age and it stands about 40 meters high above the ground. The tree was named after the first wife and princess of the Bachwezi king known as king Ndahura who had a wife called Nakayima who was the a daughter of the last Bachwezi. Prince Nakayima was once rooming around on the hill of Mubende is believed to have disappeared in this tree thus the name Nakayima tree. Ever since then the tree is said to posse supernatural powers of fertility, healing bas well as good healthy. The Nakayima tree is as well believed to solve problems of the community and the offer blessing.

Tree has got big buttress roots on the base and if you about 4 kilometers away in Mubende town, you will clearly observe the hooks of this tree west of the hill. The Nakayima tree root system developed a root system and formed three spaces which are believed to bedrooms of the Jjaja Musoke, Nalongo, Jjaja Masaka and Ddahula, and Nalongo.

Nakayima was a keeper of the tree and she acted as a mediator of the community and the king. Nakayima could get affected by small pox and possessed by the Ndahura spirit for a number of days and during that period she had powers to treat the disease of small pox.

Initially before the Bachwezi took ownership of the hill, there was a magician called Kamwenge who showered from Mbarara. This magician had two sons who later established themselves as the local rulers and they worked so hard to grow their territories. These were succeeded by the Bachwezi king Ndahura who over power and lived at the hill of a long period of time more than the years that the sons of the magicians had lived.

Ndahura handed over power to his son wamala when he retired in his birth place in close to fort portal that is believed to have settled at the hill.

Apparently people, who worship the Bachwezi, pay a visit to the shrines in respect to Nakayima of the Bachwezi dynasty. The Bachwezi were demi gods and the Nakayima tree was the home to all their spirits that were recognized and worshiped by the Bunyoro and Buganda people. When the local people take a visit to the Nakayima tree, they will growth sacrifices such as animals, money, harvests so as they can get favor and blessings from their gods.

There was a time when people were affected by small pox and the Bachwezi influenced the him pastoralists to stand still and wait for the healing, there were no clan powers any more instead there arose the Bito dynasty rulers who were formed by the Bachwezi king known as Mubende that meant that “there is another one”. This did not mean the king or another power but some other ruling power.

In the 1899 there was a religious conflict between the Bunyoro and baganda. The occupant Nakayiwa Nyanjara had to be forced to disappear and by the time she returned a year after, all their seven worshiping huts had been destroyed and all the graves were vandalized. Later king Kabalega took a visit to Mubende hill so as to worship with the Nyanjara.

After some years, the Mubende hill was given out to Muganda Saza through the indirect colonial rule of the existing British government who was in power in 1902. And because of this, Nyanjara had to shift to Bugogo and this is place he met his death in 1907. This was the first Nakayima who was not traditionally buried in the cemetery close to the sacred tree.

Apparently the Uganda national museum has the Nakayima Nyanjara Regalia that was captured. She died her body was taken to buried on top of Mubende hill and one of the items in her Regalia included the ancient pots. The Nakayima tree is one of the historical places to visit and it can be combined with your visit to kibale forest national park.