Rwandan Genocide – The Genocide was a major Rwandan-Cultural massacre of civilians in Rwanda belonging to the two Tutsi and Hutu ethnic groups. The vicious fighting began on 6 April 1994 and lasted 100 days, leaving more than 800,000 Hutu and Tutsis dead along with 2 million refugees crowded in sick settlements in neighboring Burundi, Uganda and Tanzania. Rwanda is known worldwide for the genocide of 1994 which claimed the lives of more than 800,000 people in 100 days. Nevertheless, the country has since normalized, stability has been restored where by peace and security now prevail in Rwanda. Rwanda is listed among the safest country in Africa to flourish in the tourism industry due to the dynamic governance leadership of H.E. Paul Kagame the president of Rwanda and the solidarity of Rwandans who have partnered with each other to build Rwanda in to an outstanding country and the better place for its people and the continent at large.

Who were the Tutsis and Hutu?

The Tutsi and Hutu were the two ethic groups who were the first inhabitants of Rwanda, they shared the same origin but had different activities. The Tutsi where cattle keepers while the Hutu did not rare any cattle at all. Which is not the common practise any more since any tribe/ person can now rare cattle and even intermarriages between the two different tribes. After the conquest of the region, the Hutu and Tutsi Europeans have an ethnic role to play. As Rwanda sought its freedom from Belgium, the Belgians turned to the position of the two communities, faced with a revolt led by the Hutu, and the Belgians abandoned the Hutus, the largest population in Rwanda, to rule over the new government of Rwanda. This angered the Tutsis and contributed to tensions that persisted for years between the two parties.

The events that led to the Rwanda Genocide 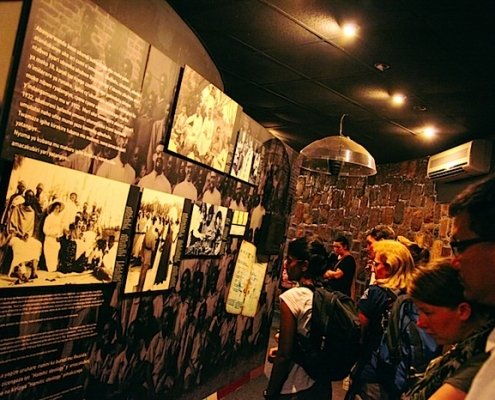 The genocide was triggered by the assassination on 6 April 1994 of Rwandan President Juvenal Habyarimana, a Hutu, when his plane was shot down over Kigali airport on his way from a conference held in Tanzania.

Since 1973 onwards, the President of Rwanda had a dictatorial regime in which he had never allowed the Tutsis to participate in it. This was shattered on August 3, 1993 when Habyarimana signed the Arusha Accords that strengthened Rwanda’s Hutu forces and also enabled the Tutsis to participate in the country’s governing relations. The Hutu were greatly insulted by this. Given the fact that nobody had quite a true story about who would be accountable for the Rwandan president’s death. Just one day after, simple collision triggered the chief of the Hutu used a chance of death of the president to launch an attack on the Rwandan government and took over the government which later initiated the madder between the two parties leading to the death of large number of people in the country.

The killing of people was done in every place in the country including, churches, Schools, hospitals, homes among others, this place where used as the hiding places for people from the rebels but still, they where killed from these places too. The killing was mostly used by hand weapons, such as clubs, hand matches, pangas and others, both men and women and the children suffered brutal murder and some women and girls where raped and later killed.

Rwanda’s genocide eventually came to a halt when the Rwandan Patriotic Front (RPF) took over the Rwandan regime. This military group consisted of Tutsis who had fled in the previous years and most of whom had arrived from Uganda. Those were able to access and take over the government and seize control in mid-July 1994 which marked the end of Genocide.