Uganda is one of Africa’s top tourist destinations, Uganda is a diverse country with a number of tourist attraction in various destinations in the country, offering different activities that travellers love to engage in while on their safari in Uganda. Safari in Uganda is something every traveller in planning to come to Uganda, would love to take part in, with the fact that the country has a number of attractions and activities. Uganda is rich in culture with different people, the ha hospitable people where you will able to meet them during your safari visit in Uganda. Not only that, the country is also rich in magnificent sceneries ranging from different savannah vegetations, lakes and rivers, tropical rain forest, snow-capped mountains with a variety of wildlife species living in these areas. There are many national parks in Uganda with a lot of attractions to be viewed during any of your visit in different national parks. During your Uganda safari, you will visit any of the national’s parks depending on the choice of the places you would love to visit in Uganda. While in Uganda, you will visit any of the following places; Bwindi impenetrable forest national park, famous for harbouring half of the worlds total of the mountain gorillas and others living in Mgahinga national park both situated in south western Uganda and taking part in gorilla trekking experience with number of visitors received in these areas every year visiting the gorillas. Murchison falls national park, queen Elizabeth national park, Kidepo valley national park and Lake Mburo national park are popular with wildlife safaris in Uganda. Kibale forest national park, is best known as a home for chimpanzee, the park harbours a lot of chimpanzee some of which are habituated chimpanzee and opened to visitors for visitors taking part in chimpanzee trekking.

The national parks, harbour abundant attractions such as, Mountain gorillas, Chimpanzee, Tree climbing lions, different bird species, and many other animals seen in 10 national parks in Uganda, among others. Uganda the pearl of Africa, is a bio diversified country with not only wild life in different national parks, but also the favourable climate of the country makes Uganda one of the best regions for settlement, beautiful cultures with hospitable people to make your stay in Uganda during your safari a memorable one of your life time. 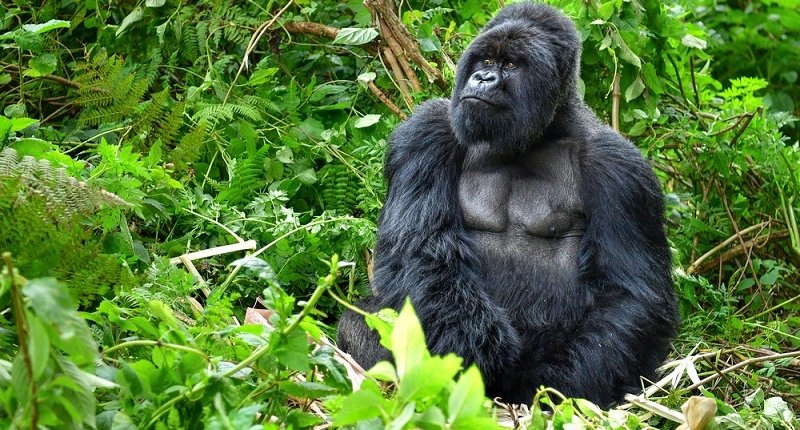 Bwindi national park, has over 19 habituated gorilla families opened to trekkers for gorilla trekking, and one gorilla family is trekked at Mgahinga gorilla national park, Bwindi harbours a lot of gorillas with over half of the world’s population therefore, visitors in Bwindi, have 98% percentage of seeing the gorillas in their natural habitat. during the trek, the exercise may last for quite some time before locating the gorillas depending on the location of the gorillas on that particular day. Finally, when you meet them, you will be allowed one hour with the gorillas, this time will be use to observe their behaviours, feeding habits, female nursing young ones, how they interact with each other among others. This is one of the unique moments when you meet this Apes with the total DNA of 98% making them the closest relatives to humans.

To book the gorilla permit, you will need to specify the destination you will be trekking the chimps, since the permits bare the different locations from which chimpanzee trekking takes place from. Unlike gorilla trekking in Bwindi ang Mgahinga national park, Chimpanzee trekking, in any of the destinations in Uganda, the activity is offered twice in a day that is, the morning shift and the afternoon shift, and lasts for one hour from the time you meet the chimps. Therefore, when booking the permits, you will specify too the time you will be trekking the chimpanzee in Kibale forest, Kyambura George, kalinzu forest and Budongo forest. The morning shift starts at 8:00am and the afternoon shift commence at 2:00pm.

Murchison falls national park; Murchison falls national park, is one of the biggest national parks in Uganda, the park is situated in south western Uganda and its one of the best regions receiving many tourists every year. The park is blessed with several attractions ranging from flora and fauna, vegetation, primate species wildlife species and the scenic features among others. Which offer various activities for the visitors visiting the park including; chimpanzee trekking, wildlife viewing, birdwatching, boat cruise on the Nile, nature walks, hiking among others which will offer the best time of your tour safari in Uganda full of fun and memorise.

Bwindi impenetrable forest national park, is located in southwestern Uganda in Kanungu district and its one of the most visited parks in Uganda. Bwindi national park, is famous for harbouring the endangered mountain gorillas, the park is one of the popular regions in Africa for gorilla trekking experience with over half of the worlds population of mountain gorillas living in Bwindi impenetrable forest. Bwindi comprises of four sectors harbouring the habituated gorillas opened for gorilla trekking, the Bwindi sectors include; Buhoma the park headquarters which was the first region where the first habituated gorilla started and the first region where gorilla trekking started from, Rushaga sector, Nkuringo, and Ruhija sectors. The gorilla families are available for trekking every day. Hence, visitors taking part in gorilla trekking, will be required to book the permits depending on the sector you will be trekking the gorillas from according to your preferred dates. Bwindi harbours over 19 habituated gorilla families opened to trekkers for gorilla trekking and one group, is trekked at Mgahinga gorilla national park.

Kibale forest national park; situated in western Uganda, the park is best known as the primate capital reason being that there are over half of the chimpanzees in Africa living in Kibale forest national park, and over 13 primate species living in the forest. When you visit Kibale forest national park, the popular activity in the park is chimpanzee trekking which is the most done activity by many visitors in the park. Kibale forest national park, also offers an opportunity to visitors who would like to spend more time with the chimps to participate in Chimpanzee habituation experience where by the visitors spend the whole day with the chimps under habituation, compared to chimp trekking which only lasts for one hour from the time you meet the chimps. Chimp trekking involves trekking in the forest in search for the habituated chimpanzee families and when you locate then , you will be given time to watch them study their behaviour, feeding habitats and interactions with one another as you take photos ,  you will also view other primate species lie the black and white colobus monkeys, red tailed monkeys, baboons, bird species and other mammal species.

Lake Mburo national park, is situated in western Uganda, the park is rich in biodiversity despite the fact that it’s the smallest national park in Uganda. The park is famous for wildlife experience which you will view during the game drives in the park, you have an opportunity to view animals like the Zebras, giraffes, Uganda kob, hippos, buffalos, warthogs, impala, giant forest hogs, Eland among others. The park also offers activities like the boat cruise, nature walks, nocturnal game drives, bird waiting activity, horse riding, sports biking among others.

There other famous areas that visitors in Uganda ought not to kiss during any of their safari visits in Uganda these regions are famous with several attractions and activities to so while in the park. Including, kidepo valley national park, lake Mutanda, Ssese Islands, source of the Nile in jinja offers activities like white water rafting, Horse riding, bungee jumping among others, lake Bunyonyi is Uganda’s deepest lake offering activities boat cruise, community walk, bird watching, scenic views, swimming among others. The lake is free from Bilharzia and dangerous animals like hippos, crocodiles, thus its ideal for swimming among other places in Uganda.

Uganda is best visited throughout the year, although the best time of the year to visit is during the dry season/ peak season recorded to be having little or no rainfall at all, the dry season is from the month of June, July, August, September, December, January and February. During this time, the ground is dry and there is no rainfall and in case of any, just alight drizzle facilitating many activities around the park by this time, the parks are flooded with tourists and the activities are at its peak. When the ground is dry, travellers find it easy to trek in forest to do activities like chimpanzee trekking, gorilla trekking, game viewing, forest walks, among others, during the  dry season, the grass is short enabling animal viewing and for primate safaris, like chimp trekking and gorilla trekking, the trails will be dry and easy to pass through. Uganda, also experiences the wet season from the month of March, to May, October to November these months are known to receive heavy rainfall which interferes with the activities in the park. like chimp trekking, gorilla trekking among others. But the wets season, is also ideal for bird watching activities, by this time, there will be plenty of food, fruits in which birds feed on hence great time for bird watching activities.

The Uganda safari has lot more to offer beyond your imagination. Having interest in visiting Uganda, reach to us at adventure in the wild safaris a tour registered company organizing safari tours in Uganda beyond to countries like Rwanda, Tanzania, DR. Congo, Kenya and may other destination in Africa.

What Should I do If A Gorilla Charges?

Are Gorillas endangered?
Scroll to top