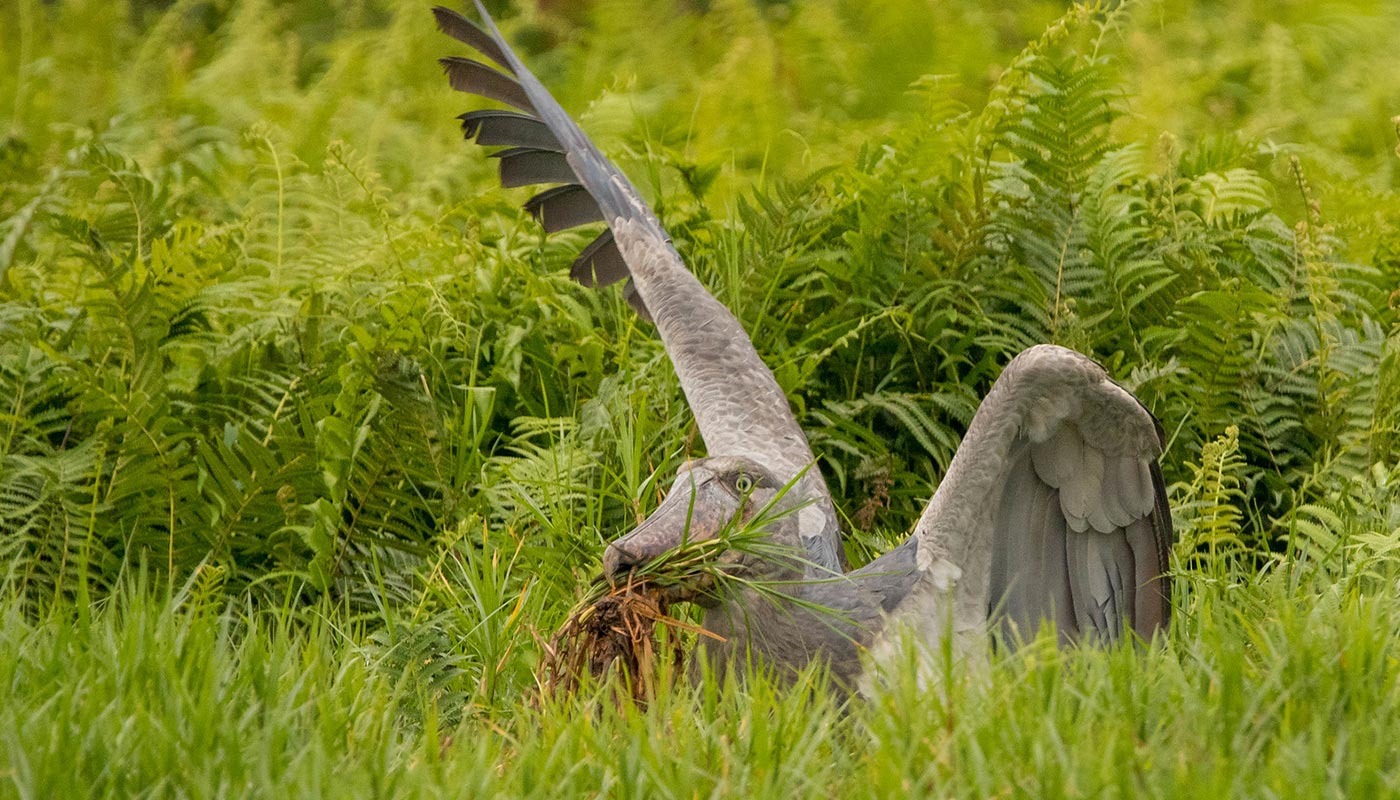 Shoebill Uganda – The exclusive shoebill stork is one of the rare to see birds in Africa and is one of the famous birds of Uganda to look out for on your Uganda safari. The name of the shoebill stork was derived from its shoe-shaped bill which also gives it a large head hence being referred to as a “King whale-head”. Although shoebills can live for as many years as 45 and above, they are a critically endangered species of birds, there are about 1000 shoebills left in Uganda. It may therefore not be easy to spot them just anywhere but chances are normally higher when on a Uganda birding safari to specific spots that we recommend.

Habitat of the Shoebill stork Uganda

These fascinating birds are found in swampy areas with fresh water characterized with thick papyrus plants, water lilies and other grass common in fresh water swamps. In Uganda, one of the most famous destinations for shoebill birding safaris is Mabamba bay located on the western side of Entebbe on the shore of lake Victoria. The guide and the tourists move on the water to the areas where the bird is commonly spotted using a canoe.

Some of the reasons for the reducing number of shoebills which are nearing extinction are destruction of their habitats and fishermen who kill them because of their traditional beliefs that the birds are a sign of bad omen.

What do shoebill storks eat?

Shoebill Uganda mainly feed on small aquatic creatures such as fish; tilapia, catfish, lungfish and many other small-sized fish that it is able to catch, baby crocodiles, frogs and turtles. It also eats snails, snakes, monitor lizards and rodents. The shoebill stork has a sharp bill which enables it to capture its food and it is wide enough for it to eat them.

Social life: Shoebill storks are solitary birds. It is common that you will spot one at a time.

Uganda birding safaris are not limited to the shoebill stork but also offer a lot more species of birds. Out of more than 1,000 bird species in Uganda, you can tell us your favorite birds that you wish to see and the best place to easily spot them shall be recommended. You will have the best birders to take you for the birding safari to areas such as Mabira forest and to Uganda’s national parks where amazing numbers of bird species have been recorded, for example Semuliki national park where you’ll also see the Sempaya hot springs, Queen Elizabeth national park where you also have an opportunity to spot the tree climbing lions, Bwindi impenetrable national park where the bird watching activity will be included on your gorilla trekking safari, Kidepo valley national park famous for ostriches among the birds of Uganda and here you’ll enjoy real African wilderness, Kibale national park and Bigodi swamp are wondrous birding destinations and bird watching here will start after the thrilling Chimp tracking experience in Kibale forest.