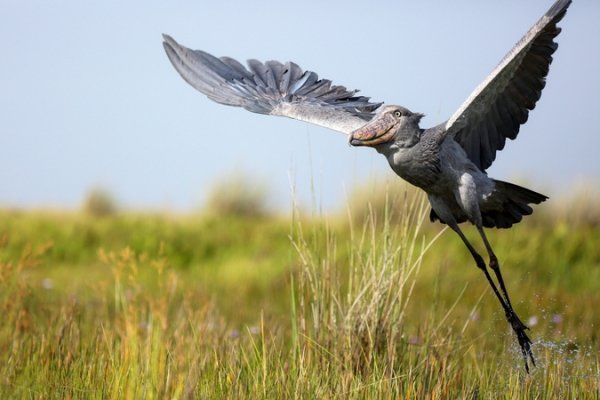 The shoebill is also known as the shoe billed stork, the whale head or the balaeniceps rex. The shoebill is a large water bird with the mainly grey adults and browner juveniles. The shoebill lives in tropical east Africa in the large swamps. It’s a tall bird of about 110 – 140 cm height thou some reach 152 cm high. Its length from the tail to the beak ranges from 100 – 140 cm.

The shoebill is characterized for its slow movements and its stay for long period that’s why many describe it as statue like. The shoebill is attracted to poorly oxygenated water bodies. Its quite sensitive to human presence and it can also leave its nest if invaded by humans. Despite the fact that the shoebill is a heavy bird, it can stand on a floating vegetation.

The shoebill deals with its prey patiently, slowly and lurchingly. After spotting the prey, the shoebill launches a quick violet strike.

The shoebill starts its nesting right after the end of the rains as both parents take part in the building of the nest on a floating surface after clearing out an area of 3m across. The shoebill nests near the end of the wet season to enable the eggs hatch towards the beginning of the following wet season. The shoebill lay 1 – 3 eggs whitely colored and its incubation lasts for around 30 days having both parents brooding, shading, guarding and feeding the nest but the female ones are slightly more attentive.

The population of shoebills is estimated at between 5,000 and 8,000 individuals mainly of which are found in the swamps of Uganda, south Sudan, eastern democratic republic of Congo and Zambia.

Were you can the shoebills in Uganda

The best spots of watching the shoebills in Uganda are in the albert delta the Victoria nile found in Murchison falls national park and mabamba bay marshes on the shores of Lake Victoria.

Murchison falls national park is located in the north western part of Uganda near Masindi city. it was established in 1952 and its governed by Uganda wildlife authority. the park is locally known as kabalega national park.

The park got 450 bird species that are easily spotted in the park’s woodlands, savannah grasslands and the riverine forests. Having the Albertine Nile bank which habits numerous bird species such as the Albertine rift endemic birds

Having some occasional birds that visit the park and these include gray crowned crane, the giant kingfisher, giant heron, the black headed lapwing and many more.

The has also got the shoebills and these can be easily watched on a three hour boat cruise down from Parra jetty that brings you close to some of parks’ hotspots for wildlife sighting. Here on the shores of the Nile you closely watch elephants, hippos, buffalos, waterbucks, kobs, crocodiles and many more.

At the Ramsar, several bird species are easily watched including the black winged pratincole, the lappet faced vulture, the lesser kestrel and the Denham’s bustard.

This is a wetland found on the edge of lake Victoria in the northwestern part of Entebbe peninsula. It was declared a world heritage site on 15th September 2006. The bay rides through a narrow and long bay fringed filled with papyrus towards Lake Victoria.

Mabamba bay is not only famous for its shoebill but all many other birds that include the blue swallow as well as the papyrus yellow warbler and other globally conservation concerned birds. 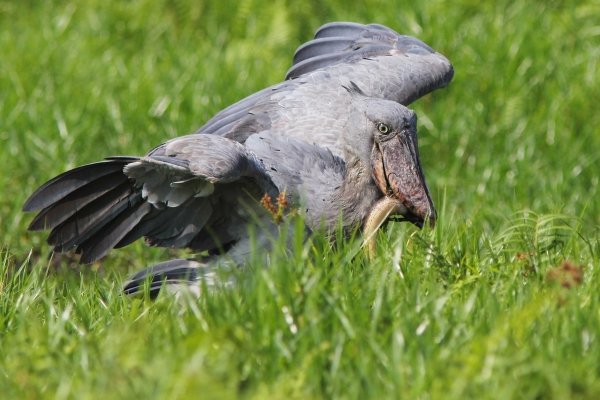 Adventure in the wild safaris usually adds a shoebill watching tour on most of the tailored made Uganda safaris basing out of Entebbe. Were you will have a boat cruise through mabamba bay.

They also customize private safaris to Murchison falls national park mixing the game viewing through out the park’s vast savannah tracks and a boat cruise down the Victoria nile towards the delta to pop up with the historical shoebill.

IS UGANDA SAFE FOR TOURISM AND TRAVEL