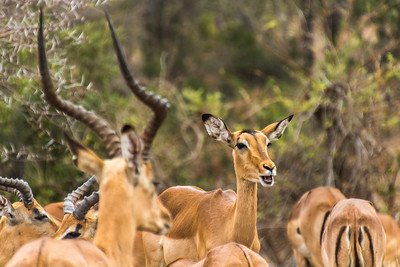 South Africa Has the biggest number of safari parks in Africa

Since tourism in South Africa has been a long time activity, it has very knowledgeable professional tour guides that other complementary services that bring the best of on a safari in South Africa. You’ll be served and attended to by the kindest people in accommodation centers.

The parks and game reserves in South Africa are well distributed across the country and this makes it easy to easily reach multiple destinations.

While on a South Africa Safari, there are a number of activities one can choose to participate in. Game drives reward with the best adventure when encountering lions, leopards, black rhinos, elephants among others. The best parks where to do game drives are Kruger national park, Klagagadi national park, Addo Elephant national park and the best time is during the dry winter and spring season when animals move to water bodies for water.

A road trip around the beautiful country enables you to have a remarkable South Africa safari because of the stunning images of the beautiful scenaries. Don’t forget to have a well charged camera for photography of the rugged terrain, spreading ocean, busy cities, the amazing semi-deserts, thick habitats of wild animals, coastal cliffs among others. The best areas to do this activity are the Garden route which takes you along the zigzag steep coastal cliffs via Tsitsikamma and Outeniqua mountain ranges for breath taking views. Other roads to drive through for a road trip are Sani Pass and Panaroma route where you’ll have a chance to see waterfalls in South Africa.

Hiking to some of the rugged and spectacular highlands in South Africa is very impressive. Anyone can go for hiking to different levels of these highlands. The best places for hiking are Table Mountain in Table mountains national park and Drankensberg which is popular for the incredible reward upon arrival at its plateau. The month of November, December, January, February and March are the best to go for hiking in South Africa.

These activities can be featured with a walk to Robben Island prison, golf course,swimming at Gansbaai fishing town or Durban.