Uganda Museum is located along Kira road, from Kampala city, the distance covered on road from Kampala city to the Museum is approximately 4km via kitintale Hill. The museum is the biggest and oldest museum in Uganda which started way back in 1908, the Uganda Museum is a place that holds most of Uganda’s cultural heritage where one can have a view of historical cultures and treasures of Uganda under one roof. For an incredible journey, the impressive set covers more than two million years of human history, spanning from statues to portraits in deem light spaces.

A brief history about the Uganda Museum

The British Protectorate Government founded the Uganda Museum in 1908 after Governor George Wilson called for the procurement of Uganda articles of interest. This was achieved on the former Kampala hill at Fort Lugard. Bishop J. Wilson, E.Lanning, Church Hill, and others performed the exploration and paleontologist studies plus archaeology. The place eventually was small to handle all the experimental works and discoveries, which prompted the museum’s transfer and relocated to Makerere University College’s Margret Trowel School of Fine Art in 1941. Upon raising funds, a permanent home was later built and the museum relocated to its current location on Kitante Hill in 1954.

With a diverse and well-captioned ethnographic range spanning clothes, fishing, agriculture, pharmacy, faith and leisure, as well as archaeological and natural history exhibits, there is plenty to intrigue you here. Highlights include contemporary musical instruments, some of which you can perform, as well as the fossil remnants of a Napak rhino, a creature that died eight million years ago.

The Uganda Museum does work and from the 1960s to the current there is a wide range of exhibits. Visitors can see the exhibitions shown in the Natural History or Palaeontology Gallery inside the museum building and open to the public. On the other side, the museum offers learning in the form of outreach programs, presentation lessons classes, during this event, tourists and students are presented with a museum guide that leads them to understand more and explore further insights into the place through and around the house. The tourists will have an opportunity to view the Museum side by side. The museum features areas such as the archaeology department featuring a number of different finds that are part of the old stone age, iron smelting, demonstrating the methods used over a million years ago. 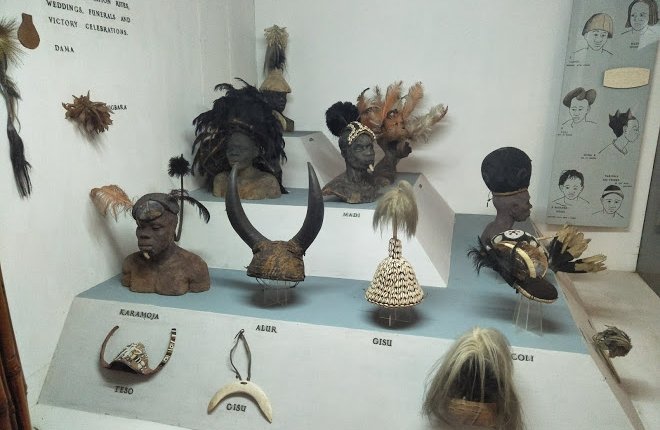 The building also houses the traditional music portion featuring the first equipment to be made locally in the pearl of Africa. The cultural village of huts representing typical lives of citizens in Uganda is situated at the rear of the Uganda Museum building. For tourists wanting to observe the Ugandan people’s traditional practices, a range of traditional resources including wood-based dairy pots, cactus containers, flint knapping, jewellery making, horn work, ceramics, cutlery, leather works, weapons and musical instruments are displayed. The huts are constructed basing on the different tribes in Uganda, like Batooro house, Ankole house, Tooro house, Bahima, among others. The huts displayed are from different regions of the country, that is from the south, western, eastern and the Northern regions of Uganda.

Getting to Uganda Museum

There are several ways and means of transport to reach the Uganda Museum, one can either use the public means which is the taxis and the Motor bikes (boda-boda). These are highly used methods of transport in Kampala city, but also in case a person requires the use of private means, they are also available it all entirely depends on the choose of the client on how he/ she would like to get to the Uganda Museum.

The museum of Uganda has now become renowned for organizing numerous celebrations and events in Kampala. The blankets and whine, for instance, and also the recently hosted the Rolex festival, ekyoto cultural shows, and many more enjoyable fun factories are being held in the Uganda Museum grounds.  The museum is available from Monday through Saturday, enabling tourists to travel in and out of the museum building in a versatile manner. With the number of guides ready to serve you at any time you will need them.

Accommodations nearer to the Uganda Museum

There are several accommodation facilities situated closer to the Uganda Museum from which visitors to the place can find a comfortable accommodation to stay in while on Kampala city tour and most especially to the Uganda Museum. The lodges include; Golf course Hotel, Fairway Hotel and Spa, Metropole hotel Kampala, Bush pig Backpackers, Arcadia Suites-Kampala among others.

The Uganda Museum in Kampala

The Uganda museum is the biggest and oldest museum in the country and is also one of the oldest in east Africa. It was established in 1908 on behalf of the British Protectorate government. It has different sections that display a variety of ethnographic materials.

It started in a small temple at Fort Lugard found on old Kampala Hill which became too small to accommodate the entire specimens. It was relocated to the Margret Trowel School of Fine Art in 1941 and later on funds were raised so that it would be expanded and situated in a permanent place hence shifting it to its current location in 1954. It is located on Kitante Hill about 5km from Kampala city on plot 5 Kira road towards Kamwokya town. The building of the museum was designed by a German Architect Ernst May and its beauty has been maintained.

The museum displays and exhibits ethnological natural historical and traditional life collections of Uganda’s cultural heritage. It is rare to see traditional African culture tools that were used by the ancient Africans hundreds of years back but this is one of the few areas where you can see them. There are over 3,000 editions of historical maps, periodicals and photographs and about 100,000 objects of historical and cultural values.

Uganda museum collaborates with a number of national and international institutions of higher learning like Makerere University, Mbarara University, Natural History Museum in Paris, College de Franca among others to conduct research across the country in areas like Karamoja region, parts of Eastern Uganda on the foothills of Mt. Elgon and in the western rift to Dellu where fossils of interest in relation to human evolution have been identified by Paleontological research unit.

By visiting the Uganda museum, you are able to see the materials that were used by Africans many years back.

Things found in the Uganda museum

This is the archeological section that has elements of the Stone Age and Iron Age and this is where you’ll find stone tools that were used about 1,000,000 years ago. There are tools such as spears, horns, arrows among others. It also displays the evolution of man till date.

This section displays stones, mineral samples such as tin, limestone, phosphate, wolfram and rocks found in different parts of the country.

There is a cultural village just outside the main building of the museum represented by grass thatched huts. These huts display the tradition al lifestyle of the people of Uganda. they contain items that were used by those people including baskets, musical instruments, artwork, pots, vessels and many others. Huts at the museum are Bamba house, Batooro house, Hima house, Ankole house, Kigezi house representing the western region tribes. The eastern part of Uganda is represented by Karamojong house, Jopadhole house, Teso house and Bugisu House. Among the items in the Bugisu house are the circumcision tolls, knives and headgear.

There is a hose representing the central region where you’ll find backcloth, baskets for keeping food in a local way, hunting nets, and drums among others. The Alur house, Acholi house and Madi house representing the northern part of Uganda have bows, arrows among others. This village summarizes the diverse cultures in Uganda and this is how you can get to learn about their differences.

On the ground floor to the back part of the museum are cars that have been driven by former presidents.

There is a large space at the museum where events are organized such as entertainment concerts, cultural events, and culinary events among others.