Volcanoes National Park Attractions – The Rwandan part of the Virunga’s is host to Volcanoes National Park, which stretches along the DRC and Uganda frontier. The Virunga’s, which contains five volcanoes, are completely captivating and few would claim that this is not one of Africa’s most fascinating national parks in east Africa. We certainly don’t need to remind you, but of all the incredible sights and attractions that accompany the Virunga’s, the popular mountain gorillas are one of those that particularly attracts people here in the volcanoes national park.

Volcanoes National Park is one of the ancient national parks in Africa, the park was gazetted in 1952 purposely for the protection and conservation of the endangered mountain gorillas that where under a threat due to the rampant poaching activities carried out by the hunters who intruded the forest. The park is also known as Parc National Des Volcans, its situated in Kinigi a small village known as Musanze formally known as Ruhengeri in the north western part of Rwanda. Volcanoes national park Rwanda, borders the Virunga national park in Congo and Mgahinga gorilla national park in Uganda, these great national parks, form together the Virunga conservation area. The park is situated in an area of about 160km2 and known for its abundant biodiversity that have boosted the tourism industry in the country, out of the nine Virunga mountains, five of which are found in the volcanoes national park in Rwanda, the park is also covered with different vegetation types that is a home to the endangered mountain gorillas which is the main draw of tourists in the park. Besides the gorillas, the park also harbors the Golden monkeys, different mammal species, the animals spotted here include; the elephants, buffaloes, bushbucks, giant forest hogs and different bird species are spotted in park among others. Volcanoes national park is famous for gorilla trekking activities but the park also offers many other activities like golden monkey trekking, cultural visits, visit to Dian Fossey Cave, genocide memorial and may more other activities that you will engage in when you visit the country.

volcanoes national park, is famous for hosting a number of the mountain gorillas living in its forest. The gorillas in volcanoes, have become the major attraction that has drawn many travellers and the country as well to do these activities of gorilla trekking. Volcanoes national park has got several habituated gorilla families some of which are used in gorilla trekking and others for research and others are in the wild. Volcanoes national park has got a number of 10 habituated gorilla families available for visitors visiting the country for Gorilla trekking experience on daily basis. The gorilla families in volcanoes national park include; Amahoro family, Susa family, Karisimbi gorilla family, Sabinyo family, Agastya Umubano family, Kwitonda family, Titus group, Igisha family, Isimbi group, Pablo, Ugenda, Bwenge and Muhoza family. The mountain gorillas are the most threatened ape in the world, the mountain gorillas are found only in smaller portions of sheltered Afro-Montane forests in north-western Rwanda, southwestern Uganda and eastern DRC. One of many animals native to those areas is the mountain gorilla. The woods do contain several attractions such as, the beautiful birds, monkeys like the golden monkeys, l’Hiost monkeys, Magabeys, large mammals like elephants, buffaloes’ antelopes and others, rodents, insects like buffer lies are spotted here, different plant species among others.

The mountain gorilla was undiscovered until 1902, when the American zoologist Dian Fossey first the need to conserve these animals and later she was mercilessly slaughtered by the rebels. This sets the tone for the relation and the need to protect these great Apes. For a long time since it seemed owing to erosion and smuggling that the mountain gorilla was easily doomed to be lost to the earth once again. Not long after the greatest champion of the genus, protagonist was murdered in Rwanda in 1985 that lead to the destruction of the gorillas and reduced their number to less than 300 gorillas in the wild therefore, the government has tried to make sure that the primates are under protection thus they gazetted the volcanoes national park that inhabited the mountain gorillas.

Today in the world, there is over 1000 and more mountain gorillas in the Virunga mountain of central Africa, at the boarder of Uganda, Rwanda and the democratic Republic of Congo. Here the volcanic slopes are dense with tropical forests and numerous species of mammals, birds and reptiles living in the forest.

The gorillas live in groups of two to ten members and above, the family is lead by a male gorilla known as the silver back, he is the head of the family, he provides protection and provides food for the members in its family. In case of danger on the family, the male gorilla, shows of his physical power by Standing upright, throw things, make violent attacks, pound his massive chest while roaring strong hoots or unleashing an alarming roar. Given these appearances and the obvious physical strength of the species, gorillas remain generally calm and non-aggressive when not bothered. The female gorillas give birth to one child after almost nine months of pregnancy. In comparison to their dominant kin, new-borns are smaller, weighing four pounds (two kilograms) and can only stick to the fur of their mothers, from the age of four months most youngsters fly on their mothers ‘ backs during the first two to three years of their lives. 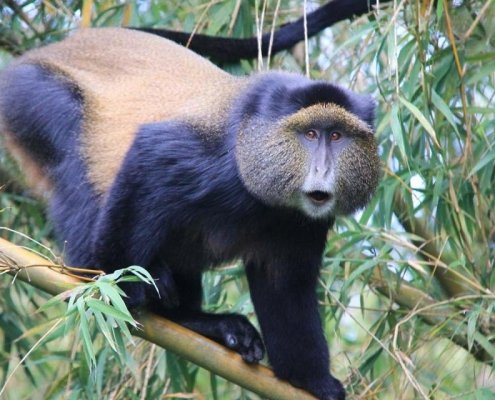 After the mountain gorillas, Golden monkeys are also one of the unique species found in volcanoes national park and have become one of the most thought of adventure in the park after the popular gorilla trekking. The golden monkeys are also among the endangered primate species in various national park, the monkeys live in groups of 50 individuals and their daily meal is bamboo shoots, fruits, leaves, plants etc.

The golden monkeys are known to be shy primates but due to the habituation process, these has helped to improve on the shyness which has helped which has helped them to accept the presence of visitors and researchers coming to the park to carry out golden monkey trekking. There is no bid difference between gorilla trekking and golden monkey trekking since they both require a trekking permit to access their natural habitats. A group of eight people is required to trek each habituated group and you are allowed to spend one hour with the them once you have found them. The monkeys are so playful as the jump from one tree to another which makes it so interesting to watch but a little difficult to photograph

Volcanoes national park, currently has two habituated golden monkey families open for trekking. The activity starts early morning with a briefing at the headquarters and then you will be led by the ranger guide in to the forest in search for the golden monkeys. And when you find them, you will be allowed one hour with them in their natural habitat.

Volcanoes national park, is famous for harbouring a variety of bird species that have attracted the bird lovers in to the park for bird watching experience. The park is a home to over 178 recorded bird species and 29 which are endemic of the Albertine rift. Birding in volcanoes national park, is mainly done in the grassland, bushland vegetation, alpine and on bamboo among others, these site harbour birds which makes it easy for bird watching since they found inhabiting those places. Bird species in volcanoes national park include; red-faced woodland warbler, archer’s ground robin, Rwenzori Batis, Rwenzori double collared sunbird, and handsome francolin, African marsh harrier, common moorhen, long-crested eagle, grey throated tit, paradise flycatcher strange weaver among others.

Dian Fossey Research Centre is an institute that was put in place by European primatologist Dian Fossey purposely for the conservation and the protection of the mountain gorillas that where under threat due to serious poaching activities. The visit to the institutes will offer you more knowledge about the gorillas and her interest in the conservation of the gorillas which later resulted in to gorilla trekking tourism in the country. You will be driven up to the starting point of the trail where you will then trek on foot for about 1-2 hours, during the trek , you will also be able to sight some of the animals in the forest such as the forest elephants, forest hogs, buffaloes and different bird species.
You arrive in the house of Dian Fossey in which she was miraculously assassinated in 1985 and afterward buried beside her favourite gorilla friend Digit. The gorilla grave yard is buried here with around 20 gorillas killed either by poachers or by natural causes.

There are over 5 of the 8 Virunga Volcanoes found in volcanoes national park, which include; mount Muhavura, mount Gahinga, mount Sabinyo, mount Bisoke, Mount karisimbi. These mountains have both facilitated hiking activities. Travellers taking part in mountain hiking, you will have an opportunity to climb any of the volcano’s mountains of your preferred interest.

Mount Bisoke is a dormant volcano mountain measuring a bout 3,711 metres above sea level, the mountain lies in the border between Volcanoes national park and Democratic republic of Congo. you can take a hike to Mount Bisoke, the mountain measures up to the height of about 400m has a stunning crater lake at its peak, Montane vegetation, Mount Mikeno in Congo, gorillas among others, rendering this volcano a fun experience to climb. The trip takes approximately 6 hours which is the 4 hours spend climbing on top and the 2 hours spent descending down.

Mount Karisimbi has the highest peaks among all the Virunga volcanoes, and the fifth highest among the mountains in Africa, measuring up to 4507 meters above sea level, situated along the equator, the mountain experiences cool temperatures which result to slow formation. The height of the peak makes hiking a little complex and challenging, so it’s only reserved for climbers who are involved in it.

Mount Muhavura is the second heights peaks among the volcano mountains. The height measures up to 4,127 metres above sea level. mount Muhavura lies between Rwanda and Uganda and its both shared by the two countries. Therefore, travellers having interest in climbing this mountain, can both climb it in either of the countries. Climbing mount Muhavura takes approximately 6 to 8 hours to get to the top. While on top of the mountain, you will be able to view the beautiful crater lake, and stunning views of the landscape below and all that is in it such as the twin lakes including Burera and Ruhondo

Mount Gahinga is one of the shortest volcano mountains among all the Virunga ranges, the mountain measures up to the height of 3,474 metres above sea level. The height favours the hikers who do not take long hikes. The mountain is an extinct volcano lying between volcanoes national park in Rwanda and Mgahinga national park in Uganda therefore, hikers on Mount Gahinga, can hike the mountain in either of the countries.

List of Other Attractions in / Near Volcanoes National Park Rwanda