Safari Blog
You are here: Home / Safari Blog / Gorillas / What do Gorillas Eat?

It’s believed that, the gorillas share a total DNA of 98% with humans and they are the next to humans after the chimpanzee, yet they live in the wild in the thick forests, the common question is that what do gorillas eat/ feed on? 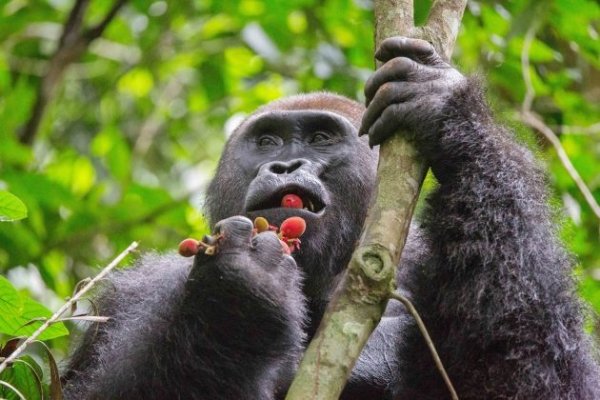 The mountain gorillas are herbivores and mainly feed on vegetation as their daily meal, they also feed on other plants like stems. Flowers, buds, barks. Seeds, bamboo, shoots, fruits, vines, herbs, roots, leaves, shrubs, and young branches from trees. They also feed on insects like ants, snails, caterpillars, termites among others but in small quantity since they are full of proteins. They also eat ash, soil to help regulate their digestive system, and to neutralize the poisonous plants that they may have consumed, also the ash adds minerals to their system and all their lively hood is in the forest, shelter, food and they depend entirely in the forest until when they die.

Mountain gorillas when feeding, do not complete the whole vegetation in an area but they feed selectively for example, they can consume stems from one plant, move to the next and eat the leaves, roots from another, and so on this is done to allow the vegetation to re-grow since they will need food also for the next day. The gorillas move from one place to another looking for food every day.

the life span of a gorilla is 35 years and beyond, the female gorillas have slow rate of giving birth, they give birth to 4-6 off springs throughout their life. They start giving birth at the age of 10-12 years and their gestation period takes about 8.5 month in order to deliver. These slow rate of giving birth, makes it hard for the population to raise faster. A new born gorilla weighs up to 3-4 kgs and feed on only breast milk up to the age of five month. The mothers feed them once in one hour, the feeding continues up to the age of 4 years. The female gorillas weigh 113kg and are five feet tall while the male gorilla weighs 136 kg to 196kg and measure up to 5 to 9 feet tall making the male gorilla huge, stronger and bigger than the female gorillas.

Mountain gorillas in any the three east African countries that is Bwindi impenetrable forest national park, Mgahinga national park in Uganda, volcanoes national park in Rwanda and Virunga national park in democratic republic of Congo. All these parks are open for tourist visiting for gorilla trekking any time of the year, gorilla trekking is an activity done in all national parks throughout the year. However, it’s so, but the most appropriate to visit is during the dry seasons when there is no rainfall and the ground Is dry and less slippery since gorilla trekking involves hiking steep slopes in the forest, it requires the ground to be dry. The dry season is from the month of February, June, July, August, September, December January these months have little or rainfall at all, the ground is dry and the vegetation is dry compared to the wet season when the ground is muddy and slippery causing difficulty in trekking through the forest.

Difference between gorillas in volcanoes National park and Bwindi impenetrable...

Getting a gorilla permit in Congo
Scroll to top