Safari Blog
You are here: Home / Safari Blog / Gorilla Trekking / What Should I do If A Gorilla Charges?

What should I do if a gorilla Charges? Mountain gorillas are the largest primate species and they live in groups, they are known to be peaceful, calm and they are not aggressive when you encounter the gorillas. They have a charming character that makes it interesting to look at that’s why many tourists in Africa would love to take part in gorilla trekking experience. During gorilla trekking, and when the gorilla charges, all you need to do is to simply follow the instructions giving to you during the briefing or the guide will direct you on what to do in order to be on the safer side putting in mind that the gorillas are peaceful and not so aggressive. Mountain gorillas in Africa, can be found in four national parks in tree east African countries which include; Bwindi impenetrable forest and Mgahinga gorilla national park both located in south western Uganda offer the best site for gorilla trekking with over half of the words population of gorillas living in the dense forest of Bwindi national park, volcanoes national park in Rwanda and Virunga national park in the Democratic Republic of Congo.

Mountain gorillas; Gorillas are the largest primate species that live in the dense tropical forests or in areas with high altitude in Africa.  They mainly live in groups of two to 30 members and the group is led by a male silver back as the leader of the family, he offers protection and looks after the females and the young ones in his family , he determines the feeding time, place to stay for the family and protect them from any cause of danger. The gorillas are herbivores animals and they feed on plants, leaves, roots, stems fruits among others.

Gorilla trekking in Africa, has become of the popular activities that has drawn many visitors to east Africa to take part in, gorilla trekking involves moving in the forest led by the ranger guide who will help guide you, offer instructions and also locate the gorillas for you. The movement, involves searching for the habituated gorilla families in their natural habitat, and when you have found a given gorilla family, visitors will be allowed strictly one hour with these huge apes from the time you meet the, but the normal exercise can lasts from 30 min to 7 hours of the day depending on the location of the gorillas on that particular day., putting in kind that gorillas are wild animals and they move from one place to another.

During gorilla trekking, you can not predict how the gorillas will be when you encounter them, when you reach them, you might find that the gorillas are in a bad mood or even they may think that it’s a threat to them. And when they detect danger, the gorillas can charge and react by making loud grunts, hoots, buoys by its self, stand on two legs and bound its chest. And when the threat persists, the leader of the group that is the Silverback will grasp anything and tears it down to show that he is ready for any thing and he is willing to protect the family from any cause of harm.

There several reason that may cause a gorilla to charge such as loud noise in the forest from the travellers during the trek, the gorillas may feel threatened, direct eye contact with the gorillas , sudden movements while in the presence of the gorillas and others may cause the gorillas to charge in order to protect the family from strangers or poachers that may be attacking the family. They can also charge when they are fighting for female trying to win females in to his group, or when their two silver backs in the group, they may not allow to share so they fight when one wants to break away from the family since the family cannot have two leaders and the fight determines the winner who will take over the family and the challenged gorilla, will go away to a form his new family group. 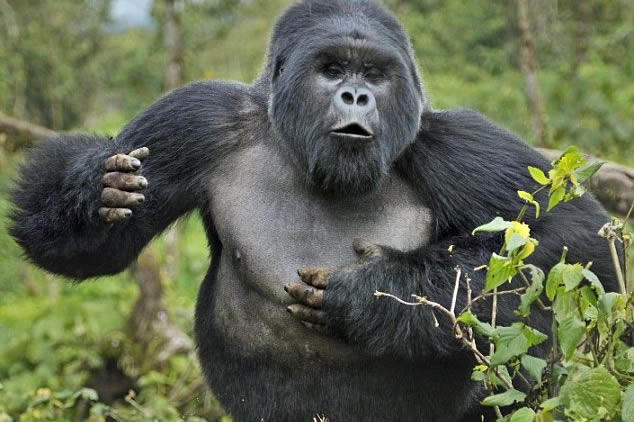 What to Do If the Gorilla Charges?

Mountain gorillas are strong primates and the Silver back will do anything defend and protect his family from any cause of threat that may cause harm to his family. Therefore, in case the gorilla charges, visitors taking part in these experiences will follow the instructions giving to them or listen to the instructions from your guide who will then direct you on what to do in order to safe guard you self.

Walk away steadily; when the gorilla charges, you are supposed to run away from the gorilla this is because, it will run after you and will attack you, but instead, you are advised to walk away form the gorilla taking one step after the other without making any sudden movement to create the distance between you and the gorilla.it will cool down and walk away from you. You can even fall down or keep relaxed or looking up at trees to show that you are defeated and you do not want to attack them.

Crouch down; when the gorilla charges, its advisable to be calm down, keep quiet, and unthreatened you can even bend down to show respect and unwillingness to attack the gorillas. you can lower your self down on the group making your self smaller than the silverback. This is reason to show that you not a challenger and you don’t mean any harm to them so it will cool down and will not attack you.

Follow the instruction from your guide so that you are on the safer side; before you embark on gorilla trekking in the forest, travellers are briefed at the starting point which is the parks headquarters, you will be reminded on the dos and the don’ts of gorillas while you are with the gorillas. You will be led by an armed ranger guide since they spend number of times visiting the gorillas so they are well aware of the moods and when the gorillas are irritated. Therefore, the guide will direct/ instruct you on how to behave in case the gorillas becomes wild in the presence of the visitors. And case the gorilla charges, the guide will instruct you on what to do so all you need to do if you do not know what to do, ask your guide and will instruct you throughout the process.

Keep a distance; during gorilla trekking, visitors are advised to keep 7 meters feet away from the gorillas when you meet them in their natural habitat. Visitors are not allowed to touch the gorillas since they are wild animals except for the case when the gorilla touches you. When you touch them, they will feel threatened and may be forced to attack you as a way of defending themselves.

Sometime, you can pretend to be an ape; In case the gorilla charges, and you have tried all possible options and nothing seems to be working, be brave and act like another ape yourself, by coming towards the charged gorilla,  you can start plucking leaves, breaking stems, chewing vegetation, napping on the ground to show the gorilla that you are aggressive and hostile too, it will get scared and run away from you.

What should I do if A Gorilla charges?