The wildlife in Queen Elizabeth national park is a big reason why Uganda is the Pearl of Africa. This area has diverse wildlife that lives in the wondrous locations and landscapes of this area. Ranging from mammals to different vegetation types, this park has been referred to as “a medley of wonders” because what you encounter on your wildlife safari is really wondrous.

Queen Elizabeth national park is located in southwestern Uganda, along the equator, with various craters, lakes, Kazinga channel connecting the lakes Edward and George, Kyambura gorge with a tropical forest, associated with escarpments of the east African rift valley and many more landscapes. These are natural habitats to the variety of wildlife in Queen Elizabeth national park.

There are about 95 mammal species in Queen Elizabeth national park. This is a huge number which most parks in east Africa do not reach. There are both small and big game. Common mammals seen in the park are African savannah elephants, Uganda kobs, waterbucks, buffaloes, lions, leopards among others. This abundance of game makes the park a great game viewing destination. There are specific areas where tracks have been constructed and are maintained for game viewing, that is in Kasenyi plains and in Ishasha. Ishasha is famously known for the tree climbing lions which climb up in fig trees and rest on the branches. It is only in queen Elizabeth national park in western Uganda and in Lake Nakuru national park in Kenya where lions are often seen in trees.

Queen Elizabeth national park also prides in the huge population of hippos which live in the water bodies in the park most of them being seen at Kazinga channel while on the boat cruise. It also has about 2500 elephants which can be seen while on the game drive, at Kazinga channel when temparartues are high and along the shores of Lake Edward. Buffaloes are common at Nyamununka crater, at the shores of Kazinga channel and in many other areas. Uganda kobs will commonly be seen in the Kasenyi plains where they can easily be able to secure themselves from predators, therefore this same place is where lions, leopards and hyenas are commonly found.

The biodiversity of Queen Elizabeth national park also includes primates which live in the forests around this park. However, the baboons are even in the bushes close to the main road and can be seen any time while driving to or from the park. There are chimpanzees living in the “valley of apes”-Kyambura gorge, and a few others in Maramagambo forest. Other primate species in these forests include black and white colobus monkeys, red-tailed monkeys, vervet monkeys and baboons.

There are about 35 reptile species in Queen Elizabeth national park. a kind of reptiles that you will easily see there are the Nile crocodiles which regularly sunbath along the shores of Kazinga channel. These crocodiles amazingly live in the same area with many other animals in this area in harmony, for example, buffaloes, hippos, birds and elephants among others. Other reptiles in the park are monitor lizards, tortoise, pythons and many more.

Queen Elizabeth national park boosts for having the biggest number of bird species in east Africa. It is a home to 612 bird species including the resident and migratory species. Key bird species include the African Broadbill, White winged warbler, Martial Eagle, Black Bee-eater, Black-rumped Buttonquaila and Papyrus Gonolek among others. There are several areas in the park recommended for birding and birding experiences in all areas are perfect.

Queen Elizabeth national park has 5 vegetation types, which blend to make a stunning vegetation cover. The biggest part is occupied by savannah grassland vegetation seen in Kasenyi and Ishasha characterized with tall grass and scattered thickets. During the dry season, this grass turns golden and predators camouflage in it when hunting. Forest vegetation is found in Maramagambo and Kyambura gorge, swamps and wetlands found on water bodies, bushes and thickets are mainly in Mweya and Savannah grasslands along Kyambura-Kichwamba.

This diverse vegetation cover allows different animals to live in this area hence a variety of animal species and a number of activities throughout the year. 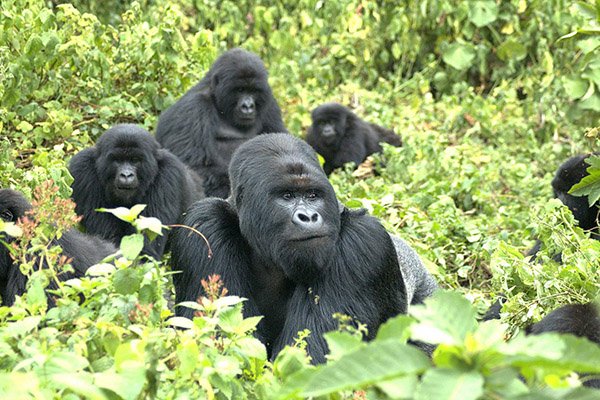